This Single Mother Is Struggling To Save Her Son's Liver From Failing | Milaap
loans added to your basket
Total : 0
Pay Now

“He’s always in pain and sometimes he throws up blood, but there’s nothing we can do to ease my brother’s suffering.”

In 2013, Srikar’s and his family’s life changed for the worse. One morning he started vomiting blood and it alarmed his mother Jayamma and his younger brother Srihari. They immediately took him to a hospital in Kurnool where he was diagnosed with a failing liver. To aid him in recovery, they bandaged his damaged liver through endoscopy and gave him the necessary treatment. But 4 months later, his illness came back worse than before. He started vomiting blood again. Now his condition is so serious, that only a liver transplant can save him.

Srikar’s aspirations came to an abrupt stop, with his diagnosis

Srikar, now 24 years old, has been suffering from Decompensated Liver Disease since 5 years. Throughout this time, he has been having frequent episodes of blood vomiting, fever, and swelling in legs and the stomach. At an age where everyone else focuses on careers and building a future for themselves, Srikar struggles to live.


The first two times Srikar got these episodes, the doctors treated him with necessary medication and bandaged his liver. But only a year after the second round of treatment, his legs and stomach had swollen up and he was in excruciating pain. There were fluid deposits in his body due to his failing liver.

The pain was so bad, that Srikar could hardly move and the doctors said that in order to get better, he would have to stop all outdoor activities, including attending college. His education came to a halt before his younger brother Srihari enrolled him in a distance learning BA program.

He hates the struggle his mother and brother are going through, to save him

“A year after he was treated for the second time, his leg and stomach started swelling. We knew it was bad news, but we did not know how bad it would be. We’re a poor family and out of means to afford such an expensive treatment.”

The doctors told them, that a liver transplant was inevitable if Srikar was to survive. For a 24-year-old who had thought of taking over the responsibility of handling the housed, this was the worst news he had received in life. Srikar is confined indoors for all purposes and it kills him inside to see his aging mother and younger brother lose their sleep over his condition.

While supporting his elder brother to pursue his degree, Srihari enrolled himself in B.Tech and started doing night shifts at a part-time job, to supplement the meager income their mother brought home from her job. Jayamma’s income was barely enough to get by, for the three of them.


For Jayamma it was getting increasingly harder to juggle between her job, taking care of Srikar and the household. So, after finishing his B.Tech, Srihari had to give up his job so that he could look after Srikar and help his mother manage the household.

Srikar and Srihari lost their father, Satyanarayana, in 2010 to a heart stroke and their financial condition had taken a hit. Since then Jayamma and Srihari have been trying very hard to make ends meet, and fund Srikar’s treatment. But the mounting costs of the hospital are way beyond their means. He needs your help to recover and get back up on his own two feet.

Your contribution can make all the difference between life and death for Srikar.

The specifics of this campaign have been verified with the concerned hospital. For more details, please contact the campaign organizer 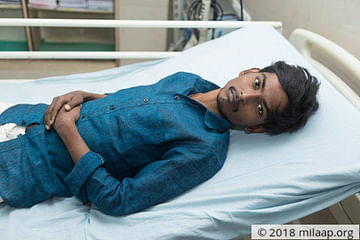 Since 5 years, Srikar has been battling for his life. He urgently needs a liver transplant to...