Shilpa, an entrepreneur who has a bright future planned for her children | Milaap

Shilpa, an entrepreneur who has a bright future planned for her children

On a Monday morning, I left the house in high spirits. With a plan to meet up with four Milaap borrowers for the day, I was very keen to know how they had all started their businesses right from scratch and grown them further. On the way, Mr. Jeetendra, the Prayas unit staff member accompanying me, enlightened me on how distinctive are the micro businesses run by the women entrepreneurs in Chandkheda, a neighborhood in Ahmedabad, Gujarat.

I was here to check on the progress of the Kanchan Mahila Mandal, a group led by Kanchan Thakor, after they had borrowed an enterprise loan from Milaap’s community of lenders. As Kanchan was busy with work that day, Shilpa, one of the other members from this group took out time from her hectic schedule to meet us the following day.

Shilpa, a 39-year-old woman, dressed in a traditional local garb, greeted us with a coy smile. She is not only a mother of two beautiful children, but also a highly industrious entrepreneur. She has been running her business of selling bamboo products for 15 years now. She started this business before her marriage, and later, with the support from her in-laws, she was able to grow it further. She sells bamboo sticks, used for construction and decorative purposes in the neighboring cities. Along with that, she also sells bamboo tokris (baskets), which she makes herself. With the loan of Rs. 10,000 from Milaap a couple of months back, she was able to buy a lot of raw material.

She and her mother-in-law both divulged into giving information on how the loan from Milaap had helped them. Holding her 9-month-old son in her laps, Shilpa expressed her contentment and how her business was now helping her in saving a sum of Rs. 3000 on monthly basis. One thing that made me glad was how Shilpa had planned in detail about which school she wanted her son to study in. Her biggest dream is to provide proper education to both her children. That is her utmost priority. 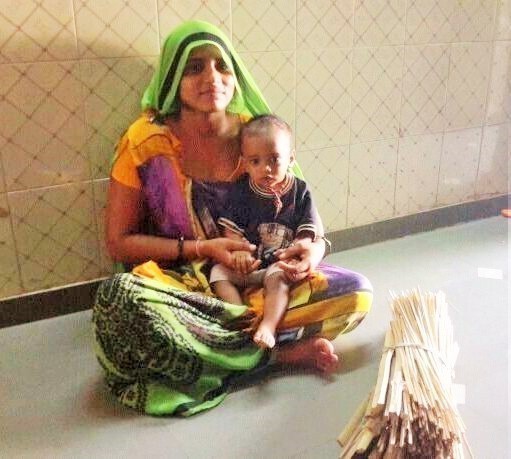 Shilpa with her 9-month-old son