She used her loan for something else, and still tripled her | Milaap

She used her loan for something else, and still tripled her savings

With the blazing sun shining brilliantly over the land of Chandkheda and the temperature soaring with each passing hour, that Thursday was turning out to be quite dreary. It was time to meet the last Milaap borrower of the day. I, along with my unit branch officer, was having a pretty hard time finding her house, as all of them looked exactly similar. After a bit of ferreting around, and with the help of some kind neighbors, we were finally able to find her house. I was here to check on the progress of Hina Mahila Mandal, a group led by Shantadevi, after they had borrowed an enterprise loan from Milaap’s community of lenders.

As Shantadevi was too occupied with work that day, we couldn’t meet her. Instead, Omvati Bhagel, another member of the group, took out time for us from her hectic schedule.

Omvati, a woman in her mid-thirties with a very gentle voice, was feeding lunch to her children who had just returned from school. Omvati runs the business of selling necklaces, the one that she makes herself using beads at home. She has been running this business for five years now. It takes her around an hour or so to make each necklace. And on an average, she makes around 12 such beautiful necklaces each day, which later, she sells to the shop owners in the areas nearby.

With her loan from Milaap, she was able to buy a lot of raw material. This eventually helped her to a great extent. And now, she is able to save a sum of Rs. 3000 on a monthly basis, which is three times what she saved earlier and just Rs. 500 short of the target she had projected when taking her loan. But besides buying the raw material, she honestly stated that she also brought an air cooler with the loan provided. She explained her plight and how difficult it was getting for the children to live, considering the room that they were living in was suffocating-hot and airless. Clearly, this hardworking and enterprising woman had almost met her targets despite not using the entire loan amount; which meant, the returns, had she invested all of it in her business would have been amazing!

Omvati, a conscientious woman, also expressed her will to start another business of sewing clothes, one that would help her in supplementing to the family income in a much better way. With her immense potential and abilities, I am sure she will succeed. She wants her children to be well-educated, and that’s what makes her so driven. 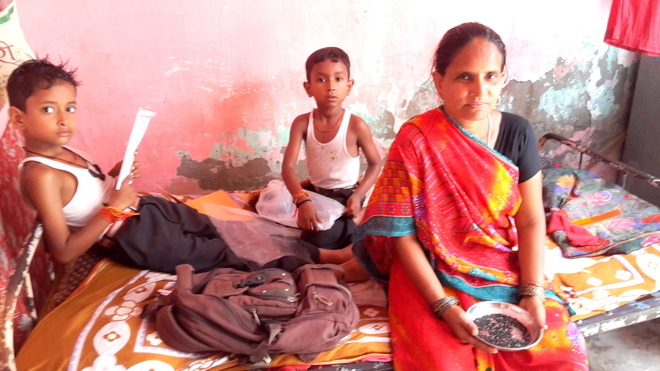 Omvati along with her two sons, who just returned home from school