Help this 50-year-old woman win the battle of life

Shares
Shares
Share on whatsapp
Shanthamma is a 50-year-old woman with influenza. She is severely diabetic and has been unconscious the last 12 days. To survive, she needs to be in the hospital and take antibiotics. Her family is too poor to continue her treatment and need help saving Shanthamma's life.
Vinod next to Shanthamma in the hospital

Being strong and resourceful for her children

“My father doesn't do much. It was my mother who worked hard, put together rupee after rupee and brought us up,” says Vinod, 24, about his mother Shanthamma. Shanthamma has undeniably gone through tough times to bring up her children. She stays with her family in M Hosahalli, a small village on the outskirts of Bangalore.
When the kids were very young, she worked as a daily-wage worker. Her husband took all her money and spent it on alcohol. She fought back one day and he decided to teach her a lesson. He broke her legs so she couldn't work.
Fracture in both legs is nothing for the truly determined. Shanthamma went to the village elders and asked for help. Everyone knew her well enough and agreed to give her a loan to set up a small canteen. The canteen became popular and gave her the money to put all three of her children through school. This was 15 years back.
Shanthamma with her husband Sriramappa in better health

“Every one in the village loves my mother. She talks to every one with affection and has never picked a fight. They saw her struggle for money and food every day. They didn't mind helping her,” Vinod explains.

Fending off illness for as long as possible

Shanthamma and her three children helped her run the canteen. Once her two elder daughters were married, she found it hard to keep up the cooking. She shut the canteen and started a tea stall instead. At the tea stall, Shanthamma and Vinod have been selling tea and snacks for the last four  years.
This gave the family an income of Rs 4,000 per month. On this they managed all their expenses. “Ever since my sisters got married and left home, my mother's routine has become very sedentary. She would go to the shop in the morning and come back home. That's when her health got worse,” says Vinod.
Shanthamma developed severe diabetes in 2013. In this weakened state of health, she caught a virulent cold. She got a fever, became very weak and finally fainted and didn't get up, which is when she was rushed to the hospital.
Shanthamma at the hospital where she has been for the last ten days

Arranging for money has been very difficult

Vinod has borrowed a lot of money at high rates of interest from his village moneylenders for his mother's treatment. He has arranged for Rs 1 lakh for her immediate treatment. The family even sold off everything in their shop for her treatment. The shop has not been opened in the last three weeks that Shanthamma has been sick.
But for Shanthamma to complete her treatment the family needs Rs 13 lakhs. “She is the centre of our world and to see her get so sick really pains all of us. We want her to get better and come back home at any cost,” says Vinod.
Lack of money prevented her from seeking treatment but let it not be the reason her family loses their pillar of strength.

The specifics of this case have been verified by the medical team at the concerned hospital. For any clarification on the treatment or associated costs, contact the campaign organiser. 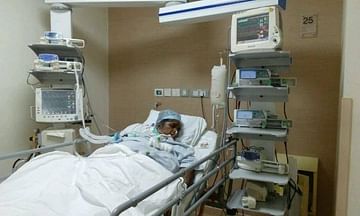 Save Shanthamma's life and help a poor family