You are sending a message to
Ananth Xavier
Go back

This Single Father Needs Your Help To Fight Cancer

Shares
Shares
Share on whatsapp
41-year-old Selvaraj is a widower and farmer affected severely by the failed monsoons. He had to quit agriculture and take a job at the local battery recycling factory where the toxic environment aggravated an existing condition, causing an aggressive form of blood cancer. He is fighting for his life today so he can survive to care for his two young daughters.
Originally from Tiruppur, Selvaraj lost his wife soon after his second child was born. He raised two daughters (10-year-old and 14-year-old) single-handedly, with whatever he could make by farming. Over the past few years, crops failed on his land, and he had to work at a battery recycling factory to support his children. He is focused on educating them, and providing the best he can.

"I will take any occupation to earn my living. After all, I have two daughters to support- who will take care of the family?" says Selvaraj resolutely.

It began with a cold and fever. Selvaraj went to a doctor at a private hospital in Tiruppur. As it is normal, the physician prescribed medicines for his symptoms. However, when his symptoms did not subside, they conducted tests and discovered that his lungs had been affected. At the time, Selvaraj was diagnosed with the primitive stage of tuberculosis, but he did not respond to the treatment, and his symptoms got worse.
The family moved him from hospital to hospital until a bone marrow test revealed that he had blood cancer with heavily affected lungs. Now at Kumaran Hospital in Kilpauk, Selvaraj is in a critical condition struggling to breathe on respiratory support.

"My daughters do not know that I am sick. I have told them that I have a bad cold and am staying with relatives in Chennai to prevent them from getting sick. I don't want to worry them, especially when the exams are around the corner. Now they are staying with their friends. They keep calling and saying how much they miss me. I miss them too. I don't want to be away either."

Selvaraj is the sole breadwinner for his small family of three. So far, his nephew, Ananth, has borne the medical expenses with help from friends and relatives. His wife even sold her jewelry to fund the treatment. The family has spent over Rs. 3 lakh on treatment for the lungs at the previous hospital and has been given an estimate of Rs. 8 lakhs for 6 months treatment including chemotherapy, antibiotics, and transfusion until Selvaraj completely recovers from his ailments.

"I will continue to support him within my capacity, and from as much as I could garner from my relatives and friends. It is my sincere and earnest request to you all to please extend whatever help you can for my uncle to recover from his illness and live for his children." - Ananth

Your contribution can help this father stay alive for his daughters.

Donate now and save Selvaraj.
The specifics of this case have been verified by the medical team at the concerned hospital. For any clarification on the treatment or associated costs, contact the campaign organizer or the medical team.

Click here to contribute to Selvaraj or for more details on this campaign.
Donate 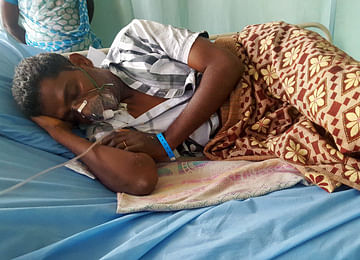 Selvraj Will Not Live Without This Treatment

His daughters do not know he is fighting for his life. Help fund the treatment that can save him.