Savings - an important aspect of business

Shares
Shares
Share on whatsapp
Vanlalmawii the group leader for Lallawmii group is elated as her daughter-in-law gave birth to a son last month around Christmas. She says now all of her time goes in taking care of the baby.
She took a loan of Rs 20,000 last year to add more chickens to the lot she already had. She reared around 100 chickens from August to December and sold them all during the festive season when the demand was high. She also reared two pigs earlier which were sold during that time. All this helped her earn good profit and support the added expenses during the birth of the child.
She is excited to show around the empty wooden shelters for pigs and chicken around her house.  She has smaller shelters for younger chickens which she calls "anganwadi"  chicken shelter. She says that  the business was giving her good money and she may start again from the next month. She has saved around Rs. 6,000 - 10,000 which helps her to repay the loan and also would be her investment for the business when she starts again. She also stitches clothes for her neighbors and friends in the spare time, which adds to her income. 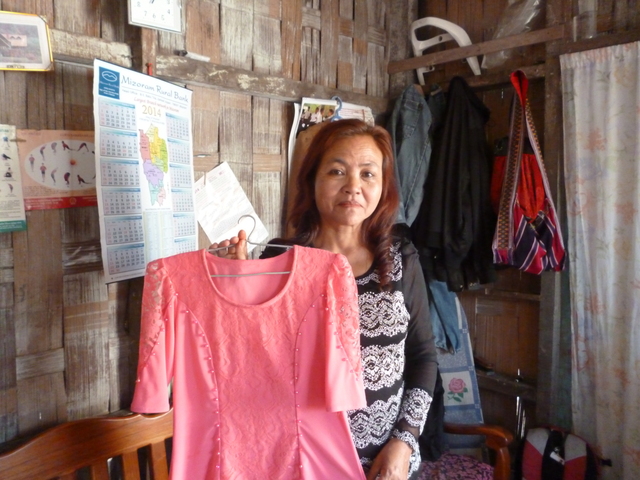 Vanlalmawii posing with the dress she stitched for her friend
Vanlalmawii lives with her two sons who are both drivers for private cars, her daughter-in-law and her new born grandson. She is divorced and around 60 years old. She repeatedly talks about her savings which have helped her in bad times. She says that women know how to save and can always find loads of work to support their families while it may be difficult for men to do so.