My Child Was Suppose To Start His Schooling Instead He Visits Hospital With A Hope To Survive Cancer | Milaap
loans added to your basket
Total : 0
Pay Now

A
You are sending a message to
Santu sarkar
Go back

Shares
Shares
Share on whatsapp
"We were looking forward to his first day of the school, he would have so much fun in his class. My heart breaks when I look at his school unworn uniform, why so much pain to my child. Why did the God give him cancer?" - Santu Sarkar, Samprikto's father

3-year-old Samprikto has been diagnosed to be suffering from blood cancer since Jan of this year. The last six months have been extremely traumatic, heartbreaking and depressing for the young parents who have gone through much trauma of seeing their child in pain and suffering due to blood cancer. The family has a got a limited support financially and physically since both of their parents and old and are unable to help them with treatment.The family is in desperate need of funds since most of their fund is already exhausted.

I have been out of Job and living in new a city since 3 months, to save my child.

The Parents were unable to find the best course of treatment for Samprikto in their hometown RaiGanj and had eventually shifted to Kolkata, to get him treated at Tata Memorial. It has been another challenge for them to live in a city only with their savings.

Santu was an Area Sales Manager in a Pharma company in Raiganj, however, since 3 months, he is out of Job.

"We as a family have made really hard decisions to save our child, I had to quit my Job since my child condition remains critical. I would love to start working however who will look after my child at home if I am out" - Santu

A Curious boy, he copies everything whatever his father does

Samprikto is an extremely active child. He wants to know about everything. When he was healthy he used to run around the entire house and playing all day. He would want to learn cooking, he would try to learn to shave whenever he saw his father doing the same.

Initially it looked like he had a prolonged Viral fever

In Jan when he complained of stomach ache and foot ache, the local physician suggested it could be a case of viral infection and try tried to treat him with anti biotics when the fever did not subside after 15 days. They took him to a hospital in Kolkata and get some tests done to ascertain the diagnosis.

The Doctors confirmed the diagnosis of blood cancer and immediately referred him to tata memorial hospital.

Your contribution will ensure Samprikto gets cured of cancer and starts going to school.

Supporting DocumentThe specifics of this case have been verified by the medical team at the concerned hospital. For any clarification on the treatment or associated costs, contact the campaign organizer or the medical team. 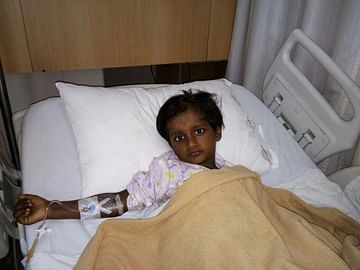