Parents Have Their First Baby After Much Struggle Only To Find Out He Is Dying From Liver Tumour | Milaap
loans added to your basket
Total : 0
Pay Now

You are sending a message to
Arvind Soni
Go back

"God sometimes is unkind, he gives the most dreadful diseases to the most unselfish and gentle souls"

3-year-old Kartik has been suffering from an extremely dreadful liver condition. The only child of the parents, it breaks their heart to see Kartik losing weight day by day. Since last 3 years, Kartik has been bravely fighting his liver condition. Kartik's parents have high hopes and look forward to bright future for him. However, his current condition is bringing much sadness and disappointment to his family.

The doctors suggested Kartik's mother to abort the fetus since there were many complications.
Birth of Kartik was through a normal delivery, however, Kartik's mother Megha went through a lot during her pregnancy. She used to suffer frequent heavy bleeding. Even the doctors had suggested the fetus won't develop as a child. But Megha was not ready to give up on her child. Karthik was a healthy child when he was born and brought much happiness to his parents.

Initially, the parents thought that Kartik's health was fine however in a day's time they observed his eyes became yellow and he passed white stool. Initially, they thought it was because he was feeding. But the doctors suggested that it could be a liver problem.

At just 2 months, he underwent a procedure

The doctors at Medanta diagnosed that Kartik's bile tubes were not developed and required to undergo biliary atresia Kasai procedure which would connect small intestine to the liver.
The poor child underwent a grueling 12-hour long surgery when he was just 2 months old. The doctors suggested the permanent solution to save Kartik would be by undergoing a liver transplant once he his immunity is developed. Over the last 3 years, Arvind has already spent 16 lakhs on Kartik's medication and treatment.

Karthik in meantime got admitted into a kinder garden and was happily enjoying learning new things and company of new friends at school. His father is was working hard to ensure he had saved enough money by the time Kartik is ready for transplant. "If he continues to vomit 100-200ml of blood he will eventually collapse"

When he was 3 months old, Kartik had to be urgently admitted to the hospital after he started vomiting pools of blood. Seeing his condition the doctor said " Kartik has 800 to 900 ml of blood in his body, if he continues to vomit blood in such quantities it might turn fatal". The doctors ran a couple of tests and identified that Kartik was suffering from liver cirrhosis and suggested implantation of stents to control bleeding.
The doctors also advised undergoing a liver transplant in the next few months in order to completely cure him of his liver condition.

"My wife is the donor and in order to ensure her liver index is perfect for the transplant, she is undergoing weight loss program to save our child."

Karthik's growth is affected due to this condition

Kartik is an extremely active child, he does not have any challenges in grasping new things and loves to play and roam around the house. However, due to his condition, he has not been gaining weight and his growth is stunted. He still weighs only 9 kgs

Last 3 months he has spent more time at the hospital than at home. He has become so used to medicines he reminds her mother saying "Don't you need to give me medicines today?"

For Kartik's transplant with the help of friends, neighbors, and donors on Milaap has been able to raise 11 lakh, however, he is still short 14 lakhs for the treatment.

The transplantation will cost 17 lakhs, however, post-operation medical care will go on for the next 4 months and Kartik would be under intensive care 24*7 by a nurse, to ensure he does not get any infection and recovers fast.

Your contribution will save a strong kid and give him a new life.

Supporting document
The specifics of this case have been verified by the medical team at the concerned hospital. For any clarification on the treatment or associated costs, contact the campaign organizer or the medical team. 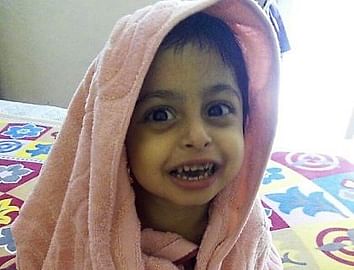 Kartik is fighting with a chronic liver disease. Your contribution will save his life.