This 10 Year Old Has Been Living On Antibiotics For The Last Six Years | Milaap
loans added to your basket
Total : 0
Pay Now

Since the last 9 years whenever Tanmay falls sick it takes at least 2 months for him to recover. The reason, Tanmay is suffering from a rare genetic condition called Chronic Granulomatous Disease (CGD), which has damaged the whole immune system of his body. He cannot self-heal and it takes months and a heavy dosage of antibiotics to treat him for even small infections.

Imagine a 10-year-old getting injected every day for the next 4 weeks just to recover from a common cold. The only solution to end Tanmay's ordeal is by making him undergo a BMT transplant. The cost of the transplant is coming to 35 Lakhs and Tanmay's parents need your help to arrange funds for the treatment. Your contribution to will certainly help in Tanmay's treatment.

"Doctors thought he was suffering from pneumonia" - Veena, Tanmay's Mother

Tanmay since birth has shown symptoms of weak immune system. Whenever he fell sick he had to be given antibiotics. The newborns and infants generally don't need such a high dose of medicines. However, He would only respond to such medicines. The parents initially thought that their child was just weak for the time being and would eventually grow strong.

However, fate had other plans. In 2010, when He turned 4, He started getting sick and very frequently used to catch cold and infections. The Doctors initially thought that this was a bad case of pneumonia but when Tanmay experienced prolonged fever for the next 25 days, the parents got really concerned.
Raise money online for social and personal cause using Milaap
The doctors then diagnosed it as a fungal infection, however, when the parents took him to Tata memorial hospital, it was confirmed that he had a rare genetic disease called Chronic Granulomatous Disease (CGD) and he would have to life long rely on antibiotics.

Since then for the last six years, Tanmay has been under a heavy dose of antibiotics. Initially, his health condition was better but since last two years is has become extremely weak.

People do not understand what is Tanmay suffering from. Since he has prolonged cough cold, people think he has been infected of T.B and humiliate the parents since they have been unable to get his treatment done. The family has also many times experienced discrimination during public gatherings.

"We feel bad aboutour child who at such a young age has to go through this."- Veena

Tanmay has lost his childhood

Tanmay has to follow a lot of precautions so that he does get any sort of infections. He cannot go for movie, shopping or eating out, he is not allowed to play in the open, cannot make friends and has also stopped going to school since last two years. With so much sadness around the parents still, cheer him up and hope to see him healthy soon.

Dr. Sunil Bhat at NH hospitals has suggested that Tanmay can be cured by going through a BMT (Bone Marrow Transplant), in factTanmay's father Chandra Mohan is the 50% matched donor for the bone marrow. He would also be given a Beta depletion kit to ensure he gets fully recovered.

Tanmay's Parents in last six years have already spent more than 6 lakhs on his treatment and in order to arrange money, the mother has sold all her Jewellery, even the family had to sell their car and have put all of their savings for Tanmay's treatment. They have managed to arrange 20 Lakhs but still require another 15 Lakhs for treatment.

Lets us contributeand help in saving Tanmay's life and giving him his childhood back. 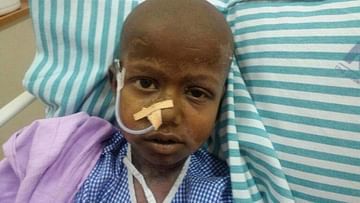