Help This Girl Fight Cancer So That She Can Continue To Bring Joy To Senior Citizens | Milaap
loans added to your basket
Total : 0
Pay Now

Shares
Shares
Share on whatsapp
Sunetra is someone that can make you smile instantly. You know those people that make you feel like you’ve known them for years? She’s like that. She is so helpful and selfless, the elders in her neighbourhood will vouch for that. Sunetra (20) would often organize small events for them, where she would sing and perform. “It’s the little things in life,” she would say.

Sunetra, however, has known only pain the last few months. An aggressively spreading cancer has taken over her life. She doesn’t have much time left without a bone marrow transplant, and she knows it.

Asita has stopped eating. She breaks down every time someone mentions Sunetra’s fight with cancer – and it happens very often.


“Everything changed in April for her..we were coming back from a relatives wedding and were crossing the over-bridge when she just couldn’t breathe. She was so tired..we thought it was exhaustion from all the festivities. By the end of the month, she was diagnosed with blood cancer.” – Asita, mother

The symptoms were not glaring – she got tired easily and she had a heavy flow during her period. Who would’ve thought that this is cancer?

In these times of despair, she finds hope in music

Sunetra is an English honours student, but more than this, she loves music. In fact, she wants to learn music therapy to help people with intellectual disabilities and senior citizens. Music has been such a big part of Sunetra’s life when she was healthy, that now, whenever she has the energy to speak she sings songs in the ward.

“Sometimes she even records it on an app and posts it. Just her voice…she wants people to be happy, even when she doesn’t have the energy to.”

If her transplant is delayed any further, it will be too late

Sunetra is on her second round of chemotherapy now, but she needs a bone marrow transplant at the earliest. The doctor’s say that the longer she waits to get the transplant, the weaker she’ll get. It might not even work if it’s too late. Unfortunately, her parents have already spent over 10 lakhs till now.

“We are undergoing the tests to be the donor for the transplant. Even in pain all she worries about is what will happen to us if we donate our bone marrow…the doctors tell her there’s nothing to worry about, but my Sunetra is like this only…”

40 lakhs – that’s what it will take to save Sunetra’s life. She’s so young and has so many dreams and aspirations. Sunetra has been the reason for so many people’s happiness, you can be hers now. 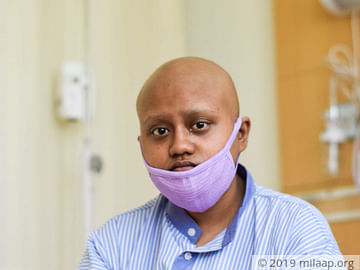 If Her Transplant Is Delayed Any Further, It Will Be Too Late

Sunetra needs a bone marrow transplant at the earliest to fight cancer.

UPI: givetomlpsunetramu2@yesbankltd (Copy to clipboard)
Or
Click here to read the instructions before you make a bank transfer.