This 17-year-old's Body Cannot Prevent Bleeding From Even A Small Bruise In Her Body | Milaap
loans added to your basket
Total : 0
Pay Now

DJ
You are sending a message to
Dr J.S. Nagabhushan
Go back

Shares
Shares
Share on whatsapp
Sandhya is a 17-year-old who stopped studying after class 10. She developed a blood disorder that made her prone to excessive bleeding and bruising caused by platelet deficiency. She has been at home the last two years because of illness. One operation promises to get her better and make her well again but her family cannot afford it.

Sandhya's parents took on extra jobs to support her treatment

Sandhya's father Nagurajappa, works in the admin department of a bank and earns Rs 5,000 per month. Because his income wasn't enough, he took on extra small jobs to make sure he could send his daughters to school. Sandhya's mother Bhagya, took on small tailoring jobs to earn some extra money.

Both worked very hard to give a good life to their twin daughters – Sandhya and Soumya. But the safe world they had put together for their children stopped 2 years back when Sandhya was diagnosed with a blood disorder they had never heard of before.

Sandhya with her parents at home

Sandhya has an illness called Idiopathic Thrombocytopenic Purpura (ITP). It is a condition where her body destroys its own platelets. This makes the body unable to stop normal bleeding caused by daily wear and tear in the body. The condition makes a person too weak to live a normal life.

For Sandhya, this started when she was just 13. She developed a fever and started feeling dizzy whenever she stood up. Her concerned parents stopped her education and started looking for a way to get her condition treated. Until last month, they were not even aware that the condition could be improved by a small operation.

Sandhya with her mother Bhagya

Sandhya needs a small operation that will stop the attack on her own blood cells. Even though they spend more than half their income on her medicines, Sandhya's parents cannot afford the cost of the entire surgery. Their only hope of helping their daughter is raising funds online.

“We try to make sure we have money to afford medicines every month. But sometimes we are unable to – those months, my daughter suffers a lot. If we can get her this operation, she will be better once and for all and will need fewer medicines,” explains Nagurajappa

Even buying regular medicines for Sandhya is a struggle for Nagurajappa. The operation is his one hope of getting Sandhya better

Because of the illness, Sandhya has to spend the best part of her student life – taking rest and watching her sister go to college. While her sister tries to bring her updates, it is not the same as actually attending class and learning new concepts.

Sandhya can't do anything because she is too weak. This operation is her only hope of restarting her college and reclaiming her life. Her parents have completely exhausted all their resources and need help saving their daughter. Contribute and help Nagurajappa save Sandhya. 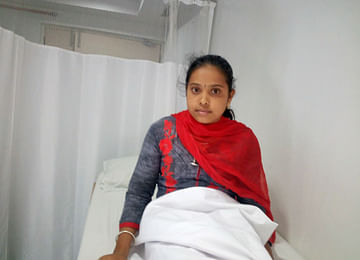 Sandhya needs a minor operation to recover from a blood disorder that has put her life on hold.