This 11-year-old Who Already Had Her Intestines Removed Is Now Fighting Liver Failure | Milaap
loans added to your basket
Total : 0
Pay Now

Shares
Shares
Share on whatsapp
Raksha's large intestine was removed last November. It isn't easy even for adults to live with a colostomy bag (it is used for collecting waste from body) but she manages it so well. She learned how to drain and clean the bag via YouTube videos. It didn't stop her from doing anything that she likes. She even continued with her music class and never hesitated to explain her condition to anyone who asks her. Now her life is in danger again, her liver is affected and she needs urgent transplant but her parents cannot afford it.

When Raksha turned 2, she had high fever and cold following which she was found to have Autoimmune Hepatitis, an inflammation in the liver that occurs when the immune system attacks the liver. Since then she is under medications and except for the occasional fevers and cold she did not have any other problems. Last November, suddenly, she had blood in her stools, later it was just blood with a foul smell.


"It was around 10 pm, she started to scream in pain, we were terrified to see her drenched in blood. By the time we took her to the hospital she fell unconscious. Her bilirubin level increased and she was on dialysis for 48 hours. Doctors said that her large intestine is injured fully and it has to be removed. When she opened her eyes after 2 days, the first thing she asked was "Maa, what is this bag for?" - Sharlet.

Despite all the pain her spirit remains intact

Raksha learned everything about managing her colostomy bag and her confidence level was high as before, she continued with her music class. She explained her condition to her friends and never hesitated to get help. Due to high dosage of medicines, her hair was falling in clumps and she had to cut it short. She did not complain  about anything, instead she wants to know the reasons for all the changes happening in her body.


"Despite her regular hospital visits, she managed to do everything she likes, she continued singing and drawing. 2 weeks back, she got terrible stomach pain and her eyes turned yellow. She got severe jaundice and doctors said that her liver is damaged fully and she needs transplant at the earliest."

Kiran was working as a General Manager in a hotel and he quit his job last November when Raksha had her surgery. Sharlet is working for Punjab National Bank but she is on leave since November. She had an insurance coverage for 3 lakh and borrowed from friends, relatives and charity organisations. So far they have spent 20 lakh for her treatment and now they need 25 lakh more for the transplant which is beyond their means. Sharlet is donating her liver but they cannot afford it without your help.

11-year-old Raksha, stays positive despite all the pain and trauma. She does not know that her parents cannot afford the treatment anymore. She will lose her life without your help. 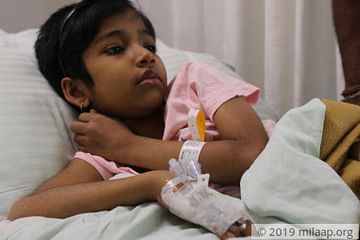 Despite Living With A Colostomy Bag, This Little Girl Has Not Lost Her Spirit

Her liver is now damaged fully and she needs an urgent transplant. She needs your help.