This Teenager Is Fighting Cancer Fearlessly, But Her Only Chance At Survival Is Beyond Her Parents' Means | Milaap
loans added to your basket
Total : 0
Pay Now

You are sending a message to
Ashutosh Bhakuni
Go back

This Teenager Is Fighting Cancer Fearlessly, But Her Only Chance At Survival Is Beyond Her Parents' Means

Shares
Shares
Share on whatsapp
13-year-old Madhurima lies down in her bed in the hospital and as she counts the blades of the rotating fan, she asks her mother, Ratna, if she will be able to catch up with her studies when she goes back to school. She has been fighting relentlessly only to go back to her normal life. Her mother assures her that she would have no trouble getting back to her studies and it won't be long until she plays her favourite guitar. The bone marrow transplant had given Madhurima and her family some hope but now, despite the transplant, she is not anywhere near recovery. Ratna knows that if she and her husband are unable to arrange funds soon for Madhurima’s treatment they would lose their daughter to deadly cancer forever.

It was the month of August in 2016. Madhurima complained of a severe pain in her shoulders and her back. Her parents, Ratna Datta and Khokan Baidya, thought it was best that they took her to a doctor. Madhurima got a little better after she took the medicines but her pain was not going away. Her face got swollen and she started having breathing problems as well. The parents then took her to another doctor who asked them to get several tests done. Ratna and Khokan’s heart was broken when they got to know that their little daughter has been diagnosed with B-Cell Non-Hodgkin’s Lymphoma.


Madhurima has endeared herself to the doctors in the hospital

“Since 2016, our life has changed completely. It has only been about hospitals and doctors. Almost every day we read up something new about cancer on the internet, try to understand if that applies for my daughter. We are scared every time she gets admitted that she won’t come back home,” - Ratna.

An active little teenager, Madhurima’s life has been brought to a standstill by cancer that doesn’t seem to go out of her life

A topper of her class, Madhurima was always the pride of her parents as was she of her school. She loved singing and dancing and actively participated in her school programs. But her favourite pastime was singing as she strummed her guitar.

Madhurima with her mother, Ratna during happier times

“She has so many plans for her future. She wanted to be an engineer and buy a car of her own. She loves animals a lot and she wants to adopt a dog when she is older. When she speaks with her expectant eyes I can’t help but smile and pray for her fast recovery.”

Despite a bone marrow transplant, Madhurima is not recovering and the treatment she needs now is out of bounds for her poor parents

Within three months of going home after her first round of treatment, Madhurima had a relapse. She was given a stronger type of chemotherapy but nothing seemed to make her any better. They then decided to carry out a bone marrow transplant and luckily Madhurima’s elder sister, Hriturima was 100% matched donor.

Madhurima with her elder sister on a family vacation

“The transplant was expensive but even then we had pinned all our hopes on it. When the doctors told us that my daughter wasn’t cured of cancer in spite of the transplant, we broke down. They said that she would need to undergo immunotherapy which would cost us around Rs 15 lakhs. We haven’t kept a count of money that we have spent till now but I am sure it would be around Rs 25 lakhs. I have sold my jewellery, taken loans but now we are out of all that money as well. I don’t know how we can manage to get Madhurima treated without any help.”

Khokan Baidya is a small shopkeeper in the small town of Udaipur in Gomati district of Tripura. He used to earn Rs 7000 per month. But since June 2017 he has been taking care of Madhurima along with Ratna in Mumbai, as a result, he has had no income for over a year now. Ratna’s brother has been taking care of her elder daughter’s education. But the poor parents know that this can’t go on forever. They are desperately trying to treat their younger daughter and secure a future for both their girls. Your generous contribution can help Madhurima go back to her normal life and bring back the smile on her parent’s faces.

Your support can save Madhurima's life 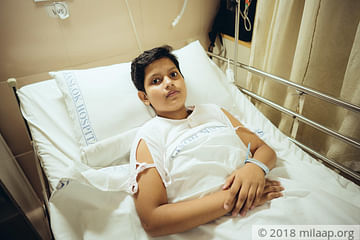