Relatives Blame Our Cancer-Ridden Daughter For The Death Of Our Son, They Refuse To Help Us | Milaap
loans added to your basket
Total : 0
Pay Now

Relatives Blame Our Cancer-Ridden Daughter For The Death Of Our Son, They Refuse To Help Us

Shares
Shares
Share on whatsapp
When one of my sons passed away due to brain bleeds so many of our relatives told us that Kashish was responsible for this.

“They said I shouldn’t have gone to the hospital with Kashish for her chemo. But how could I do that? She needed me as well, just like the baby growing in my womb," - Farida Begum, mother of 5-year-old Kashish.

Kashish is the reason these parents are still alive

Kashish’s parents are not new to loss. They have lost two sons. One to a brain haemorrhage. The other son to poverty - with no money to bring up another child, they had given their son to a relative who couldn’t bear children. But in a cruel turn of fate, they can’t even talk to that son. But they had found hope and happiness in Kashish.

"Our Kashish started walking when she was just 6 months old, she started going to school when she turned one. We were so proud of her. But look what has happened to her now. With a smile and hope in her eyes, she is ready to fight the disease. But I don’t know if we can afford her treatment."

Kashish’s fight with cancer started way back in 2015 when she complained of severe pain in her hands. When the teachers noticed, they immediately informed the parents. Tests confirmed that Kashish had blood cancer. They treated her in Lucknow and also in Gwalior. After months of rigorous treatment, Kashish was declared cancer-free. It was the happiest day for them. But during one of the regular check-ups, the doctors pointed out that her cancer was back.


She wants to become a doctor to treat children

What have we done to deserve all this?

Haroon is a watchman in a small company in Uttar Pradesh, he earns around Rs 3500. But he hasn’t been going for work since they are here in Mumbai for Kashish’s treatment. Haroon has rented out a small place in Malad - he pays a rent of Rs 4000 for that. He needs to take Kashish to the hospital every alternative day. The money that he had come with is all over now - he has spent over a lakh in the last few months.


“We can’t lose Kashish, she is all we have. Please, please help me save her. She needs the chemotherapy - I can’t stop her treatment. You are my only hope."

This family has been through more than anyone’s share of bitterness offered by life. We stand a chance to help them out and give them one ray of hope to feel relief and joy. 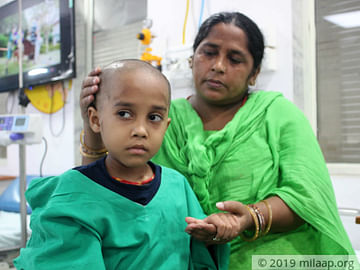 5-Year-Old Kashish Is In The Clutches Of Cancer, She Needs Treatment

Her parents are struggling very hard to get her treated, you can help them