Even A Short Run Causes This 12-year-old To Bleed Excessively, Your Support Can Save His Life | Milaap
loans added to your basket
Total : 0
Pay Now

You are sending a message to
Sarthak Pokale
Go back

Even A Short Run Causes This 12-year-old To Bleed Excessively, Your Support Can Save His Life

"He is too young to experience such pains. God has been really unkind to my son, bringing him such a dreadful disease and making him weaker day by day. it has been a difficult Journey for us so far. I don't know how can I arrange money for his treatment."- Navnath Pokhale Sarthak's Father

He started bleeding from the brain

Sarthak has been suffering from a blood-related disease called Hemophilia A, an extremely serious blood condition which prevents wounds from healing and prevents blood clotting.

Due to the disease, Sarthak suffered internal bleeding in the brain and had to undergo an urgent and extremely critical brain surgery last month. It has been a challenge for Sarthak's father to go to work and also take care of his child in so much pain.

Sarthak was diagnosed with the disease when he was still 7 months old and for the last 11 years, it has been a difficult journey. Since the treatment for the disease is limited the only relief he gets is from the plasma shots. These injections give make him feel better, however, the effect of the shot goes away in few weeks and the cycle continues.

"Our child's growth has stopped the day he was diagnosed of this, he remains weak till today."

On 3rd of September, a sudden bleeding from the nose made Sarthak unconscious. "We knew at that moment that something was wrong with our kid since a nose bleeding had never made him unconscious."

Sarthak was rushed to the hospital and had to undergo an urgent brain surgery called craniotomy to stop the internal bleeding in the brain. The bleeding occurred due to rupture of one of the veins and could have turned fatal.

Sarthak got treatment at the right time and after 4 days he was out of danger. Sarthak is still on the path to recovery and in the hospital and his father is looking for means to clean his hospital bills.
How can you help

A father wants to save his child and has been trying all the means to arrange money for the treatment. However, 11 Years of treatment have already drained all his savings. The brain surgery has cost 7 Lakhs and it has become extremely difficult to arrange funds to clear the bills.

Your contribution will ensure a life is saved and will give hope to a family who has suffered a lot for the last 11 years. 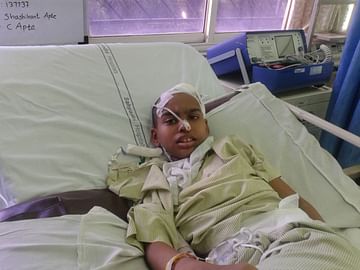 Sarthak Pokale has a blood disease that caused bleeding in the brain. You can help him stay alive.