Without Help, This Temple Priest May Lose His Son To Liver Failure | Milaap
loans added to your basket
Total : 0
Pay Now

You are sending a message to
Chinni Suri CR
Go back

Without Help, This Temple Priest May Lose His Son To Liver Failure

Shares
Shares
Share on whatsapp
Santosh is a 27-year-old whose jaundice has damaged his liver beyond recovery. His kidneys have also failed so he needs both a liver and kidney transplant. Santosh's father Mrityunjaya is a priest in a small temple who earns Rs 2,000 per month. The family needs urgent help continuing Santosh's treatment.

For this family, losing Santosh is losing hope

Mrityunjaya (49) is a priest in a small temple in Narasannapeta village, Andhra Pradesh. He lives in a house on the temple premises. He and his wife, Parvati have two children – a married daughter who lives in a village nearby and a 25-year-old son Santosh.
Mrityunjaya at the temple

From when he was a child – Santosh wanted to study and do something better for himself, his family and his village. Despite not earning much, Mrityunjaya decided long back that his children would get all the chances he could give them and Santosh is his success.

Every month, Mrityunjaya earns Rs 2,000 taking care of the temple and performing poojas. Because his income is so less, he goes out in the village asking for alms so that his family might procure enough grain to eat. With the little he made, Mrityunjaya managed to get his daughter married and his son educated.

Santosh outside the hospital
The day Santosh got his Master's degree was a proud day for Mrityunjaya. The whole family was sure that he was destined for big things because he was so smart and resourceful. Santosh had decided that he wanted to work in a nationalised bank in his village and decided to prepare for the exam.
Santosh with his mother Parvati

It was during this preparation that he got jaundice first. Later he was diagnosed with liver disease. For the last 2 years, Santosh has been fighting liver disease and his liver is completely damaged now. The disease has reached his kidney as well. With two of his major organs failing, Santosh needs a transplant at the earliest.

Mrityunjaya has already borrowed over 5 lakhs for treatment

What little land they had, Mrityunjaya sold off for his daughter's wedding. Now, they live in a small house behind the temple. He has no savings or assets left. To save his son's life, Mrityunjaya has borrowed Rs 5 lakhs. But it is nowhere close to enough. He needs Rs 25 lakhs to save his son.
Santosh with his parents at home
Santosh's condition is getting worse every day and his family has no means to get him better. All his life, Santosh has been preparing to start a better life for himself and for his family. But this illness could end the whole family's hopes. Contribute now and change the life of this family.

The specifics of this case have been verified by the medical team at the concerned hospital. For any clarification on the treatment or associated costs, contact the campaign organiser or the medical team.
Click here to Save Santosh. 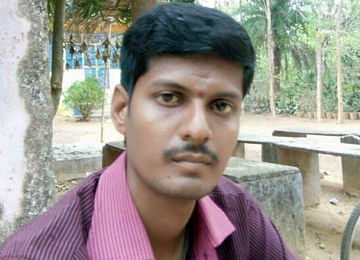 You can help this Mrityunjaya save his son

Let poverty not be the reason this father lose his son. Your contribution will save Santosh.