Single Mother is Struggling Alone to Save Her 18-year-old Daughter Sanju from Lung Cancer | Milaap
loans added to your basket
Total : 0
Pay Now

BB
You are sending a message to
Binoy Balan
Go back

Shares
Shares
Share on whatsapp
18-year-old Sanju Anna is a brave girl filled with positivity.  She had bone cancer when she was 12-year-old but she recovered after treatment. Unfortunately, cancer relapsed and is in her lungs now. She has become unable to continue and live her life because her condition is quite bad.

Five years ago, Sanju had severe leg pain and tests showed that it was bone cancer. She recovered after two years of treatment. She missed a year but she was promoted to Class 9 with the rest of her friends because of her excellent academic record. When she was in Class 10, the cancer relapsed again. She was determined to give the crucial Class 10 board exams and convinced the doctors to give a gap in her chemo cycles. Despite the painful chemo and missing her classes, she scored 87% in the board exams.

“ I kept thinking I'll beat it this time and get better, but it seems to come back. The pain is terrible but I keep telling myself that I have to be strong. I can’t give up my studies at any cost. It helps me focus on the future,” says Sanju.

Sanju had beaten cancer twice but the years after did not get easier. She worked very hard, completed her class 12 and joined college. Sanju’s father Saji worked as a driver in Saudi Arabia. With his income, they managed to educate Sanju and her sister Sinju (17).

With the money he sent, Mariamma, Sanju's mother bought a small plot and built a house. Saji came home in Jan 2016 to visit them and the newly built house. It was supposed to be a happy time to celebrate so many things that seemed to be going well finally. Unexpectedly, Saji passed away in his sleep due to a heart attack.

Sanju started college and in few months the cancer was back, this time in her lungs

Having lost her father, the only earning member of the family, Sanju was even more determined to finish her studies and take care of her family but fate had other plans. Last week, Sanju had a bad cough and became very weak. Mariamma was very worried and prayed that it would just be a normal cough. But her worst fears were confirmed. The doctors said that water had accumulated in her lungs and later confirmed that Sanju's cancer was back. In just 10 days, Sanju has become very weak, weighing only 28kgs. Her cancer is worse than ever.

“I have never expressed my fears before my daughters. I hold back my tears when I talk to them. But spend sleepless nights with worry. I break down in front of the doctors and I can do that only before them. I’m pleading with every one to save my daughter. She deserves to live. I can’t imagine losing her also so soon after we lost her father,” says Mariamma.

How  you can help

Mariamma is a housewife, but she has spent nearly 10 lakhs for the treatment so far. Church, doctors and relatives are helping her. Sanju needs 4 more cycles of chemotherapy and they need Rs 2 lakhs to complete her treatment. The family has no source of income. Sanju has remained strong throughout this painful journey. She is hopeful, wants to recover and complete her studies. Only your contributions can save her. 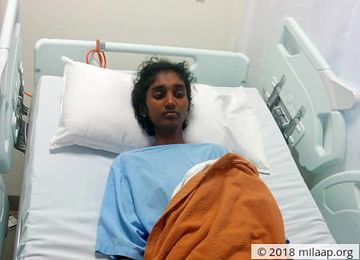 Sanju has been fighting cancer for the last 5 years

She needs 4 more cycles of chemo and her mother cannot afford the treatment.