Driven By Desperation, This Father Took To The Streets Of Mumbai To Raise Money For His Daughter's Treatment | Milaap
loans added to your basket
Total : 0
Pay Now

You are sending a message to
Siddesh Mohandas Nayak
Go back

Driven By Desperation, This Father Took To The Streets Of Mumbai To Raise Money For His Daughter's Treatment

Shares
Shares
Share on whatsapp
Saniya is a 10-year-old with an enlarged heart functioning only at 5% of its capacity. She has stopped school and needs an urgent heart transplant to live. Her father Sarfaraz paints walls and is struggling to raise funds for Saniya. He only managed to get her preliminary treatment because he walked on the streets with a board asking for money.

The doctors have told Sarfaraz that anything can happen to child

Depending on the work he gets, Sarfaraz earns about 5,000-8,000 every month. His life suddenly took an unreal, shocking turn the day he was told his daughter's heart was failing and he needed Rs 16 lakhs for a heart transplant. He could thing of absolutely no way to arrange that much.
He took Saniya to many hospitals after that - trying to treat her with medicines, but nothing helped. Meanwhile, her condition did not improve. Sarfaraz's happy, energetic child was fading. She caught bad colds, and sometimes stopped breathing. With his back to the wall, Sarfaraz did the only thing he could.
Saniya is struggling to breathe because her heart is failing. She needs a transplant at the soonest

“I refused to believe that there was nothing I could do. I can still walk and I can still beg everyone I see for help. I had nothing to lose. That really saved us. I collected Rs 50,000 from walking around asking for help in Mumbai. I also met people who saved me from despair, encouraged me and helped me not to give up,” he explains.

Not only did he collect funds to continue Saniya's treatment, but he also met people who applied for grants on his behalf. The problem is, Saniya doesn't have the time to wait for the funds. Also, grants will not cover the entire cost of the transplant. Her time is running out all too fast.
Sarfaraz with his children Saniya and Shahid at the beach before Saniya became sick

Because her heart is weak, Saniya often stops breathing

Maybe because she has always been a weak child, Saniya loves stories of heroes saving the country. She wants to grow up and be an IPS officer because she hopes to be like one of her heroes and live a life for the country. But a child's dreams are often cruelly crushed by life.
A year back, Saniya developed a severe lung infection and started having trouble breathing. Sarfaraz took her to the hospital where an X-ray revealed that she had an enlarged heart beating to only 20% of its capacity. It has now reduced to 5%. Sarfaraz was told that only a heart transplant could save his little girl.
Because there was no money, Saniya's treatment was often interrupted. Her heart-condition has deteriorated over the year and it is currently pumping at only 5% capacity. She has stopped going to school and any infection could be lethal. At this critical point, anything can happen.

Sarfaraz has often completely lost hope, only to find life-saving help from kind benefactors. So far, timely help has come to Sarfaraz and he remains desperately hopeful of saving Saniya, even though her condition is rapidly getting worse. Contribute to save Saniya.

The specifics of this case have been verified by the medical team at the concerned hospital. For any clarification on the treatment or associated costs, contact the campaign organiser or the medical team.
Click here to contribute and save Saniya
Donate 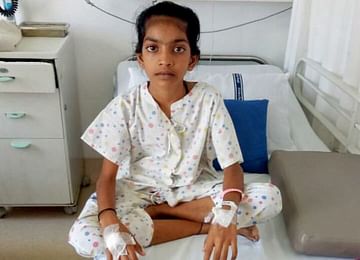 UPI: givetosaniyasarfarazkh@yesbankltd (Copy to clipboard)
Or
Click here to read the instructions before you make a bank transfer.