“She coughs incessantly every day. At nights, it gets worse. Sometimes, we fear that her lungs might pop out. Even as we try to comfort her, she breaks into another spell of cough and vomiting, as she tries to speak. The next thing we know, she has fever. This is how her life has been over the past 6 years. Now, the hole in her heart, if it is  not treated with an immediate surgery, could take her life.” - Ranjit, Sangeeta’s Father

The 3 months that followed Sangeeta’s birth, were filled with joy. While he had little or no money to provide for her, he borrowed to make sure that the little girl was happy and healthy.

"Sangeeta’s occasional fever and cough had started repeating at regular intervals; she found it extremely difficult to breathe normally. Unable to bear the pain, she would cry all night."

The little girl could not eat or drink

The doctor informed the parents that she would be placed under observation for 15 days in the ICU. She was just 3 months old, but couldn’t eat or drink anything. Then we discovered that she had a big hole in her heart.

"Her organs do not get enough oxygen because of which her body is failing. Extreme pressure in the lungs, leading to a shortness of breath, even on minimal exertion, puts her life in danger."

4 years later, her heart and lungs have put her life in danger, again

“4 years ago, she recovered partially,  and we thought her encounter with death would be a thing of the past. While she didn’t have the energy levels and appetite of other children of her age, we were happy that she had survived. Medicines were helping her resist the debilitating illness she was suffering from. But, now, the doctor tells us that she needs surgery. Her lungs and heart will fail if surgery is not performed at the earliest.” says Ranjit, exchanging a look of despair with his wife, Gudiya Devi.

Ranjit is a daily wage laborer working hours at end to earn Rs 200 a day. When Sangeeta was diagnosed with the fatal heart and lung disorder, he couldn’t work for more than 6 months. Now, he can’t find work as hospital visits mean he has to accompany his little daughter several times a week. Earning the little money that he does, he cannot afford for medicines, let alone surgery. Her life is at risk now, and the father requires 2 lakhs to fund the immediate surgery, which is the only way she can survive. 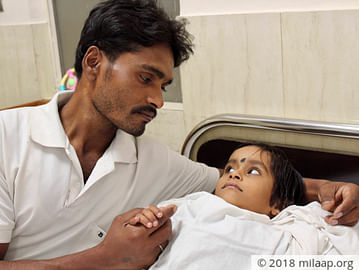 6-year-old  Sangeeta's heart and lungs can give up on her anytime. You can save her.