You are sending a message to
Chris Bastianpillai
Go back

Shares
Shares
Share on whatsapp
Avani Malaviya, Pune Kanish Thiagarajan, Piyush Kolhatkar, Deep Lalwani, Harsh Savergaokar, Siddharth Thiagarajan, and Aditya Potnis, came together three years ago, driven by their love for all things robotic. They were introduced into the world of robotics and trained to participate in competitions by their coach, Chris Bastianpillai. Today, this team from Pune is eagerly awaiting the day that they can fly to Spain for an international level robotics competition. The team, called Horcruxes, qualified for the FIRST LEGO League Open European Championship (FLL-OEC). It will be held in the Canary Islands of Spain.

FLL-OEC is a major championship, with over 300,000 children from over 80 countries participating. The theme for the year is ‘Trash Trek’, in which the children work on solving problems of trash collection, sorting and reuse using robotics. At these competitions, the children have to design and engineer Lego Mindstorms robots to complete a set of tasks, including a live robot run. They are judged on robots design, robot performance, project idea and teamwork. It is organised by FIRST (For Inspiration and Recognition of Science and Technology), an international youth organisation based in the US.
At the Regional Championships of FLL 2015, team Horcruxes won the Champions Award for their robotic engineering. They grabbed the first place in technical design, robot performance and teamwork. Next, at the National FLL 2016, held in February, they were ranked in the top five positions, which is ultimately what got them into the Open European Championship.
The credit for the accolades goes to Chris and his wife Prakalpa who founded Robominds in 2013. Robominds is a Pune-based setup that provides a hands-on learning experience to children who want to learn robotics technology. When they see children with a high potential, they encourage them to participate in robotics competitions. The duo, who have worked abroad, realised that Indian engineers are not as hands-on with their thinking and working as those abroad. Says Chris, “When we came back to Pune, Parakalpa’s hometown, we started Robominds to ensure that children had access more than just theory of science and engineering, that they were getting practical knowledge through hands-on training.”
Horcruxes is one of their very first batches. With his guidance and mentoring, the 12-16-year-old children were able to floor the judges and win competitions, moving from the regional levels to the nationals.
The children, who study at different schools in Pune, spent massive amounts of time working on their robot project for each of these competitions. They snatched hours from school days and on weekends, managing their schedules to make time for their passion. And indeed, it has paid off. ”The learning that they get out of this is phenomenal,” says Chris, adding that the exposure to different cultures and their working methods help the children to perfect their own.
“Now that they’re back from the nationals, they are working on perfecting their robot for the international levels,” says Chris. They’re preparing for the dynamic playing field that is characteristic of international competitions abroad.

He explains, “Like in real-life engineering, there are a lot of variations that the children have to face. For instance, even changes in temperature, lighting can affect the robot’s performance. These are factors we cannot control, so on the day of the competition, the real test for the kids will be their ability to react quickly and fine tune the robot in dynamic situations.”

The only roadblock that they’ve hit so far is the funding for the trip. “We are trying to do a fundraiser on Milaap, because these competitions turn out to be quite expensive for the parents,” Chris says, adding that he does not want to burden the children’s’ parents with the cost of flying to Spain and staying there for the competition. Even going to Delhi cost about Rs 30,000 per student for stay and airfare. “To go to Europe, it’s going to cost us about Rs 1.2 lakhs per participant.”

“Our focus is on building robots by trying to keep the costs down,” says Chris, “And the fundraising is an important experience for the children to understand how to build economically viable robotics technology.” The most challenging part of the competition for the children is to figure out how to build a robot that can perform a multiple number of tasks. The students go through 5-15 different prototype designs, analysing its pros and cons, and working out the details.

The team and Chris (right)
According to Chris, funding is usually a major setback for students from developing countries to go to international competitions, as they don’t get enough recognition even from the government. Nevertheless, the Bastianpillais take the funding into their own hands, as much as possible. “We take the money we get from running Robominds and put it into sponsoring these competitions,” he says. The team set up a donation through STEM Foundation, which also runs the FLL India competitions.
You can do your bit to help the team represent India on an international forum. 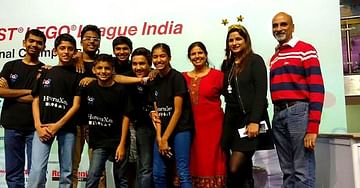 This talented team needs some support competing at the international level. Help them realise...

Donate Know more about the Team