Baby Riyansh Is In A Lot Of Pain And Suffering. Only A Liver Transplant Will Save His Life | Milaap
loans added to your basket
Total : 0
Pay Now

Baby Riyansh Is In A Lot Of Pain And Suffering. Only A Liver Transplant Will Save His Life

“He has been sick since he was born. We never knew it would be a matter of life and death.”

When Riyansh was born, he had jaundice and his treatment started immediately. Jaundice is a fairly common among infants, so parents Divyashree and Prasad were not alarmed. Unfortunately, Riyansh still cried all the time. He seemed to be in a lot of pain. When he did not show any improvement even after 2 months, his parents sought a second opinion. To their shock, Riyansh was diagnosed with a liver disease called Biliary Atresia. His liver was failing.

First surgery turned out be only a temporary respite

Immediately a surgery was done to free the blockage in his bile duct. Even before surgery, the doctors warned them that if surgery didn’t work, a liver transplant in the only option. Fortunately, Riyansh started showing signs of improvement. Till almost a year after the surgery, he didn’t have any major health complaints, except for mild fevers now and then.
Riyansh with his parents and sister

Unfortunately, his liver disease came back more aggressive than before. The fevers started getting worse and he got very irritable. Riyansh could barely eat, and when he ate, he could not digest the food. He got sicker by the day and once again his parents were alarmed by his deteriorating health.

“He can’t eat, he’s always down with fever and weakness and there’s nothing we can do, but feel helpless and cry.”

Riyansh has been under constant treatment since then. His fever and chronic cold and cough did not allow for an endoscopy, that would determine the condition of his liver. Only last week, his health was stable enough to run all the necessary tests. The tests confirmed their worst fear. Riyansh needed a liver transplant to survive.
Baby Riyansh needs an urgent liver transplant

The news came as a shock to the parents. After the first surgery, they had thought he was out of danger, but it was not so. Prasad is a medical representative and his earnings are not enough to cover Riyansh's medical expenses. Divyashree is a homemaker in a joint family. Being the main breadwinner in a family of 6, continuing treatment is becoming impossible for him. They also have a 5-year-old daughter whose school expenses need to be taken care of as well.
Riyansh with his parents

The mounting hospital expenses are getting too much for Prasad

Riyansh’s last surgery cost them Rs 5 lakhs, and the cost of every hospital admission for various tests and treatment comes to about Rs 40,000. Prasad is finding it hard to keep up the treatment. All his savings have already gone into Riyansh’s medical expenses. Prasad and Divyashree have further borrowed from friends and relatives to deal with the expenses.
Taking care of the household expenses and saving his son is taking a toll on Prasad, and his family. There is nothing he wants more than seeing his son healthy and smiling again. Let us help Prasad realise this dream, by giving Riyansh a second chance at life. 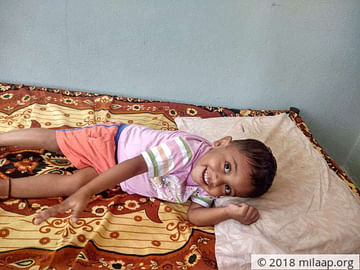 Riyansh has been fighting a severe liver disease since birth. Only a liver transplant can save him