Abandoned By Their Parents For Being Girls, These Conjoined Twins Were Left At A Hospital Terrified And Alone | Milaap
loans added to your basket
Total : 0
Pay Now

Abandoned By Their Parents For Being Girls, These Conjoined Twins Were Left At A Hospital Terrified And Alone

“It’s a miracle they’re alive. Their condition is so rare that 20 surgeons performed 24 hours surgery to separate them. Today when we see them going to school, we’re filled with happiness. But their fight isn’t over yet.” – Dr. Minnie Bodhanwala, CEO, Wadia Hospitals.

The twin girls need spine correction surgeries that will help them walk and grow up like normal children. Their life began in immense pain, but it doesn’t have to continue in suffering. Riddhi and Siddhi need your help to get corrective surgery at the earliest.

Only your support can give them a chance to a pain-free future.

Click here to help save Riddhi and Siddhi.
Donate 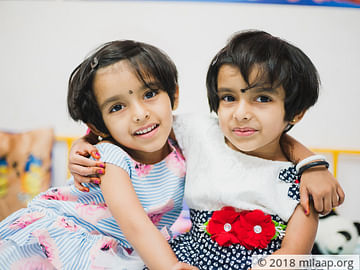 Their Parents Considered Them A Curse, But Their Survival Is A Miracle

Riddhi and Siddhi's fight isn't over yet. They need spinal surgeries at the earliest to make it.