She was Forced into Prostitution, She Now Seeks your Support in Expanding her Business | Milaap
loans added to your basket
Total : 0
Pay Now

She was Forced into Prostitution, She Now Seeks your Support in Expanding her Business

Rekha Bhandari is a 48 year old woman who has managed to escape the vicious Devadasi system, and managed to lead an exemplary life. Her childhood was cut short when she was forced into the system where young girls were dedicated to the temple, and exploited and forced to sleep with the temple priests and powerful zamindars that funded the temple. Within a span of days, her life had changed. Instead of worrying about homework and exams, she began to dread the knock on her door, announcing her next visitor.

When Rekha was finally rescued from the system, there was a new set of challenges awaiting her. She had two daughters to raise. She was not stuck with the label of being an ex-Devadasi, so the society shunned her, and jobs were hard to come by. Her daughters were discriminated against in school. Determined to do whatever it took to ensure a normal life for her daughters, she did odd jobs on fields as a coolie (labourer). It was rigorous physical labour. But the sense of dignity and freedom she felt from earning even Rs 50-60 at the end of a hard day’s work was unparalleled.

She worked hard and managed to put her daughters through college. One of them has completed her B. Ed, while the other one is pursuing a Bachelor’s degree in Arts. Seeking a life of meaning, she reached out to help women who shared a past like hers. She began to volunteer with an NGO working on AIDS prevention in Belgaum, the Karnataka State Women’s Development Corporation. Every day, she counsels former Devadasis who got out of the system, but ended up with AIDS. "We women have to look out for each other. The society still shuns us," she says.

Rekha has managed to achieve a lot against all odds, yet she faces struggles in her daily life. She barely has any savings to speak of to rely on for any emergencies. So she wants to work harder. She wants to rear more goats. She needs your help.  True to her spirit, Rekha insists that she only wants a loan that she will repay in 18 months - she does not want charity. She is seeking a loan of Rs 30,000 to buy two goats. Let’s do every bit we can to salute Rekha’s never-say-die spirit.

Click here to Learn how you can help Rekha 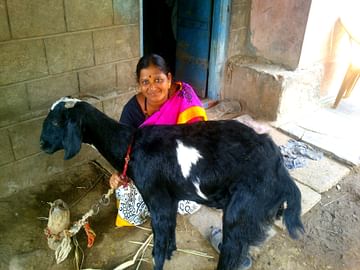 Rekha is a former Devadasi, a single mother, an entrepreneur who volunteers to help women like her

Donate Learn more before you lend
Security & Privacy Conditions of use © 2010 - 2021 milaap.org. All rights reserved.