Play a role in preserving India's heritage - make a loan to a block printer | Milaap
loans added to your basket
Total : 0
Pay Now

The keepers of a dying art

Sometimes while talking, Arif suddenly sinks into silence. Every one around him becomes quiet too. It is a contagious despair. If not for the local maulavi and his helpless family, Arif would have ended the ordeal already. He's tried twice.
Arif comes from a once illustrious family of handblock printers, patronised by the Mughals themselves. With the decline of the Mughals, the Chhippas, as these expert textile printers identified their community, migrated to Rajasthan – another place where the weather aided their craft.
Arif (left) with Raju Gautam a local activist at his now deserted workshop
The ones who stayed behind, like Arif's ancestors, ended up falling prey to debt, lack of buyers and exploitative middlemen.

A professional loyalty beyond the business

Despite being neck-deep in debt, Arif leads a group of six loyal Chhippa artisans. They will not work with any one else, because they trust and respect Arif. He is the one who expertly demonstrates block printing on a plain cotton cloth. His workshop lies barren and as he calmly shows the dying and drying vats that are no longer in use.
Arif's group that has stuck with him through thick and thin
When asked how soon he could resume his craft if he recieves some funds, his composure falters. After a few false starts, with a hope he dare not acknowledge, he makes a quick calculation. “I will need 15 days.”
For decades, families like Arif's have been preyed upon by middlemen who buy their clothes at a pittance and often default the whole payment. Moneylenders then come in and offer to give them credit to begin the next cycle of work. The interest accumulates becomes an exorbitant debt that crushes any hopes of prosperity for these keepers of Indian heritage.

What you can do –Make a loan

With one order at a fair price and some seed money to begin production – Arif and his community can get relief from years of oppression. They have a hope of actually making some money on their next cycle of production.
In a matter of hours, these expert printers are able to print large swathes of cloth in multiple colours with their handcrafted blocks
Ranmir Foundation has given them an order that gives them a 30-50 percent profit on their costs of production. But to start production and and restart their workshop, they need funds. What you lend will be used to purchase raw materials and equipment that can help Arif and his team to restart their block printing work.
While it is not possible to restore the former glory of Arif's family – it is possible to lend a hand and give the keepers of this Indian craft away back to a life of dignity. Lend now.
Donate 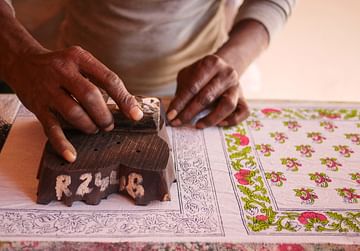 Save Arif from crippling debt