You are sending a message to
Prashant Gade
Go back

“During the course of my Robotics project, I met a seven year old who was born without arms. I was shocked to see how she was surviving without her limbs, and something in me really wanted to help her out. I decided I would gift her prosthetic arms and went to a company to inquire. I was so shocked when they got back to me, they quoted me 24 lakhs! Can you believe it? I would think with so much technological advancement, it wouldn’t be so expensive. How could an ordinary person ever afford this sum?”

Prashant was not looking at leading the rat race, he just wanted to use his education to make an impact

Prashant Gade pursued engineering with the hope of using his education to change the face of his country. But once enrolled, he realised it was all about passing and getting a high ranking job. Much to his family’s dismay he quit in his third year and decided to pursue a Robotics course. He took up a project to use this technology to invent prosthetic arms.

“Will you believe that every 10 mins there’s a new amputee in this country? More than 40,000 people lose their limbs every year and more than 85% of them… the exact number is 500,000 are still living without them as they cannot afford prosthetics. My entire aim of founding Inali was to help these people. To give them the dignity of their life back.”

500,000 people currently live without arms in our country due to lack of affordability

Prashant made it his life’s purpose to design an affordable prosthetic arm. In 2015, he was able to build this model. He invented an arm that can be fitted for anyone and anywhere. In 2016, he founded Inali to distribute these prosthetic arms to the needy, free of cost.

“I remember fitting the arm for a lady, one day. As soon as she gained control of the prosthetic, she started crying. She looked at me, joined her hands and told me that finally, she can comb her daughter’s hair. In that moment, I knew I had met God. I feel so grateful that I have been shown a path by destiny where I can make such a positive impact on people’s life.”

Inali Foundation, started by Prashant has distributed 1000 free prosthetic arms to the needy

That lady is 1 in a 1000 of Inali’s success stories. Prashant and his team have been worked relentlessly to identify people and provide them with a free prosthetic arm. Getting this arm changes their life by providing them a source of livelihood, basic survival skills and a chance to fit in the society.

“It’s our mission to travel to the remotest of villages across India, and organise free electronic-arms distribution camps every month. We are sustaining Inali via selling prosthetic arms at a nominal cost to those who can afford to buy. But there are so many people out there without the funds or access. We, at Inali, want to help them build their lives.”

Inali requires funds to produce arms that can be distributed for free, and for the cost of these remote camps that they organise. Your support will go a long way to bring people back to life, literally. You can help by spreading the word about this good cause and also by sharing information of people in bad socio-economic conditions in need of these arms through this form. 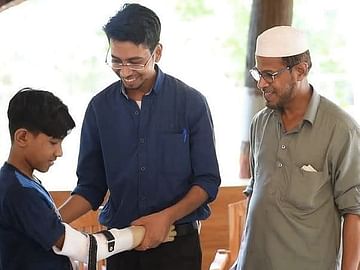 He Wants To Give Free Prosthetic Arms To Amputees

But he needs your help to reach the remotest villages of India.