Parents Of 5-Year-Old With Cancerous Brain Tumour Yearn To Hear Him Call Them 'Papa' And 'Mummy' | Milaap
Receive tax benefits by donating to this cause. 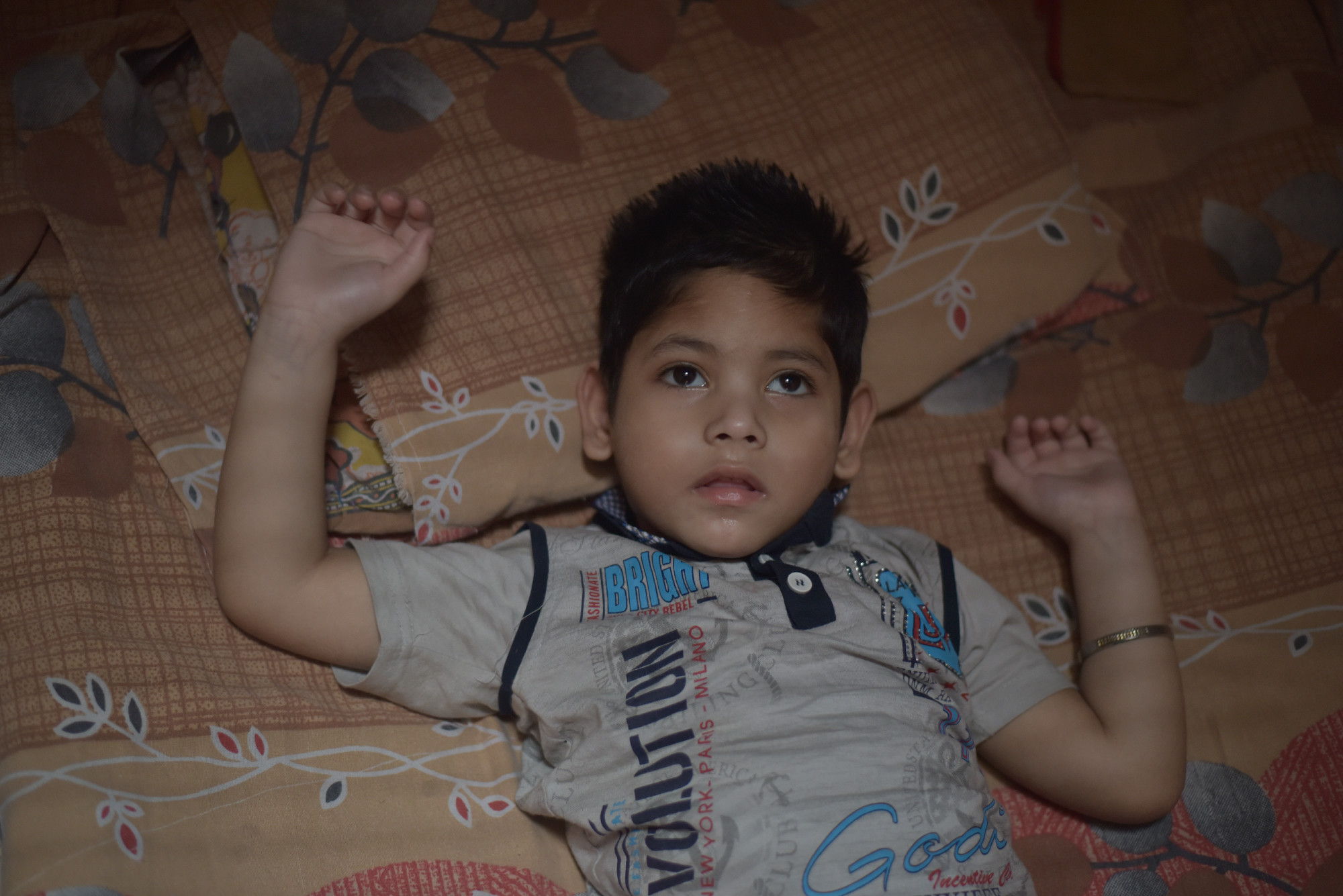 "This world is a blur for my little child. Not once has has experienced the colours of happiness. He has never really recognised us. He doesn’t know who his mother, father and grandmother are. He just lays down in bed all day and doesn’t speak, run around or walk. My heart breaks when I see him. Why is God punishing him like this?" - Sonam, mother

During the time of her delivery, Karthik's mother, Sonam, suffered complications while giving birth to him. Karthik was struck by shoulder dystocia, a birth injury that happens when one or both of a baby's shoulders get stuck inside the mother's pelvis during labour and birth.

His oxygen levels were also low, and the doctors immediately attempted to resuscitate him, only to discover that his sugar levels were also inadequate, close to zero. Doctors managed to control the situation, and Karthik was safely delivered, but he has been suffering from various problems since.

According to doctors, Karthik is also facing severe nerve compression, due to which the left side of his body is paralysed. In addition to that, he has lung fibrosis, where his lung tissues are scarring and thickening over time, causing severe breathing difficulties.

"We found out about his condition when he turned 8 months old. He would suffer from sudden seizures, and his body would tremble violently. We consulted many doctors but we are unable to get him proper treatment because we didn't have the money to afford it. The doctor also said he has a problem in the brain that has impaired his vision and that his nerves are causing him issues. He still has seizures to this day, mainly while he's asleep..." - Suman

His poor parents don't have the means to afford his treatment

Karthik is in urgent need of chemotherapy and brain surgery to kill the cancer cells in his body and remove the tumour in his brain, respectively. He also requires pulmonary fibrosis management with oxygen therapy, which entails long ICU admissions and medical care, to survive. But his parents are not in the position to even afford a single hospital trip.

Vijender Singh, Kartik's father, is a local electrician whose work heavily depends on availability. He goes from house to house seeking work, but isn't always able to earn enough to even provide his family with their basic necessities. This is also why Karthik has been unable to receive proper treatment.

"When I return home after a hard day’s work, I wish to see my child calling out to me and hugging me. To this day, he hasn’t spoken a single word like  ‘papa’ or ‘mummy’.  I feel helpless. My earnings are just too low to meet my family's needs. My child's treatment is way beyond my means. How will I save him when I can barely afford our meals?" - Vijender Singh, father

Vijender and Suman are on the brink of losing all hope. Despite running from pillar to post in order to arrange for their son's treatment, they have been failing miserably. In the meantime, Karthik's condition has been worsening, and any further delay could cost him his life.

Help these parents save their precious son.