Large Growing Tumour Has Claimed Nearly Half Of 19-Year-Old's Face, Leaving Him Vision And Hearing Impaired | Milaap
Receive tax benefits by donating to this cause.

Large Growing Tumour Has Claimed Nearly Half Of 19-Year-Old's Face, Leaving Him Vision And Hearing Impaired 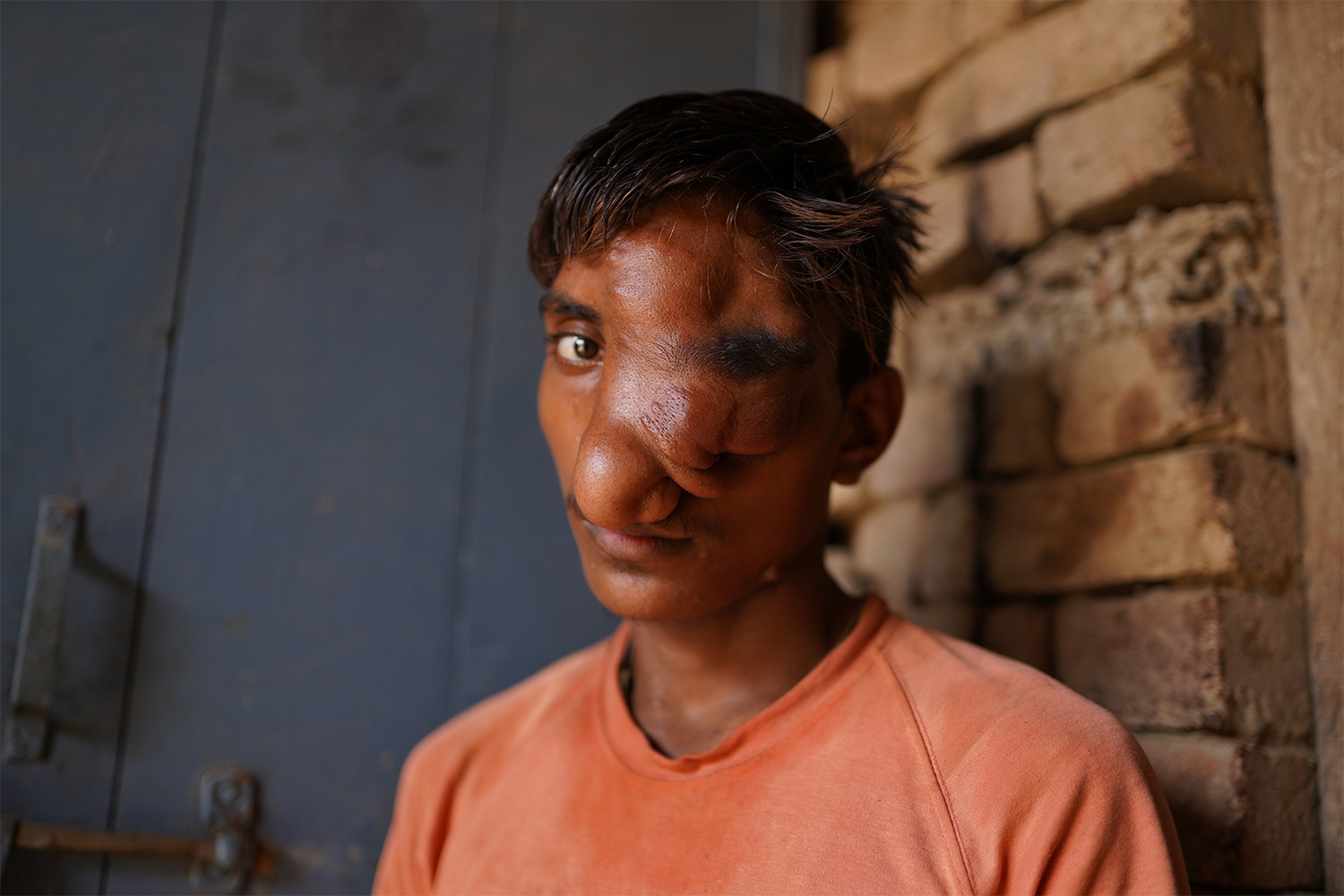 "I feel terrified to see myself in the mirror. I look like a strange creature, with a disfigured face. Even people around me can't look at me. Why was I born like this? Instead, it would have been better if I was never born. At least, I wouldn't have to live this miserable life." - Jagdish
Jagdish has spent all 19 years of his life in pain, because of a sizeable tumour that covers large portion of his face. He hides in the corner of his home, away from the discriminating eyes of people who poke fun at him and mock him for his appearance.  Aside from his ungainly look, he also suffers from multiple other health complications.

Jagdish first developed a tiny pimple on his nose, when he was about 6 months old. Believing it to be completely harmless, his parents assumed it would go away in time. However, it only worsened as time passed, and began to spread across his face. Today, it has turned into a massive tumour that covers his nose and the expanse of his left eye.

His father took him to a doctor for treatment, who prescribed a few-days' worth of medication. But that had no effect on him, and neither did it provide him any comfort. Now, he cannot see anything from his left eye, because of the way the tumour hangs over it. He can't breathe properly since the tumour has partially blocked his airways. He also feels dizzy occasionally and tends to fall unconscious.

"It is putting immense pressure on my ear as well, because of which I have hearing trouble. The tumour on my eye is growing - it’s already grown to this extent and it could just continue growing until it covers my whole face. The doctor says that is highly likely, if I don't undergo surgery soon. I don't want to go the rest of my life like this... I can't continue living with this!" - Jagdish

Jagdish has trouble eating, as the tumour doesn't let him open his mouth wide enough. He started to experience hearing loss as the cyst began to expand towards his ear. There are also occasions where it starts to bleed. This tumour has not only affected his physical health, but it has robbed him of his childhood and the teen has lost his self-confidence.

He needs urgent medical help, but his parents are in no position to afford it

"I spend all my time worrying about my son. He hasn't experienced a single day of joy ever since he was born. He begs me, ‘Mummy if you have some money, then please get me treated,’ and I tell him that we will get him treated when we have some money in our hands. But even I don't know if that will ever happen." - Meena Devi Mother.

Jagdish needs multi-stage surgeries to remove the tumour, and rectify his vision and hearing. The more his treatment is delayed, the worse it will be for him. It may get even more complicated to operate on him later on. But the biggest obstacle his parents are facing is the lack of funds. Coming from a low-economic background, there is no way they can arrange for INR 32 lakhs for their son's surgery.


Chand Kishore, Jagdish's father is the sole income-earner in his 7-member family. He is daily-wage labourer and earns about INR 300 a day, which isn't sufficient to even meet his family's daily needs. In a desperate attempt to save his son's life, he liquidated all his assets and even borrowed money from relatives. Yet, he couldn't gather enough to support his child's treatment.

"How can I arrange the money for my son’s treatment with my meagre earnings? My son thinks that his father does not want to get him treated. But how will I get him treated, when I don't have the money to cover for his surgery? All my efforts so far have been an utter failure. I don't know what else to do but ask for your help in getting my child treated." - Chand Kishor, father

Your contributions will help Jagdish get the surgeries he needs. You can be his beacon of hope. Click here to donate.