Having Lost 6 Children Already, Mother Fears 10-Year-Old's Painful Skin Disorder Could Turn Into Cancer And Kill Him | Milaap
Receive tax benefits by donating to this cause. 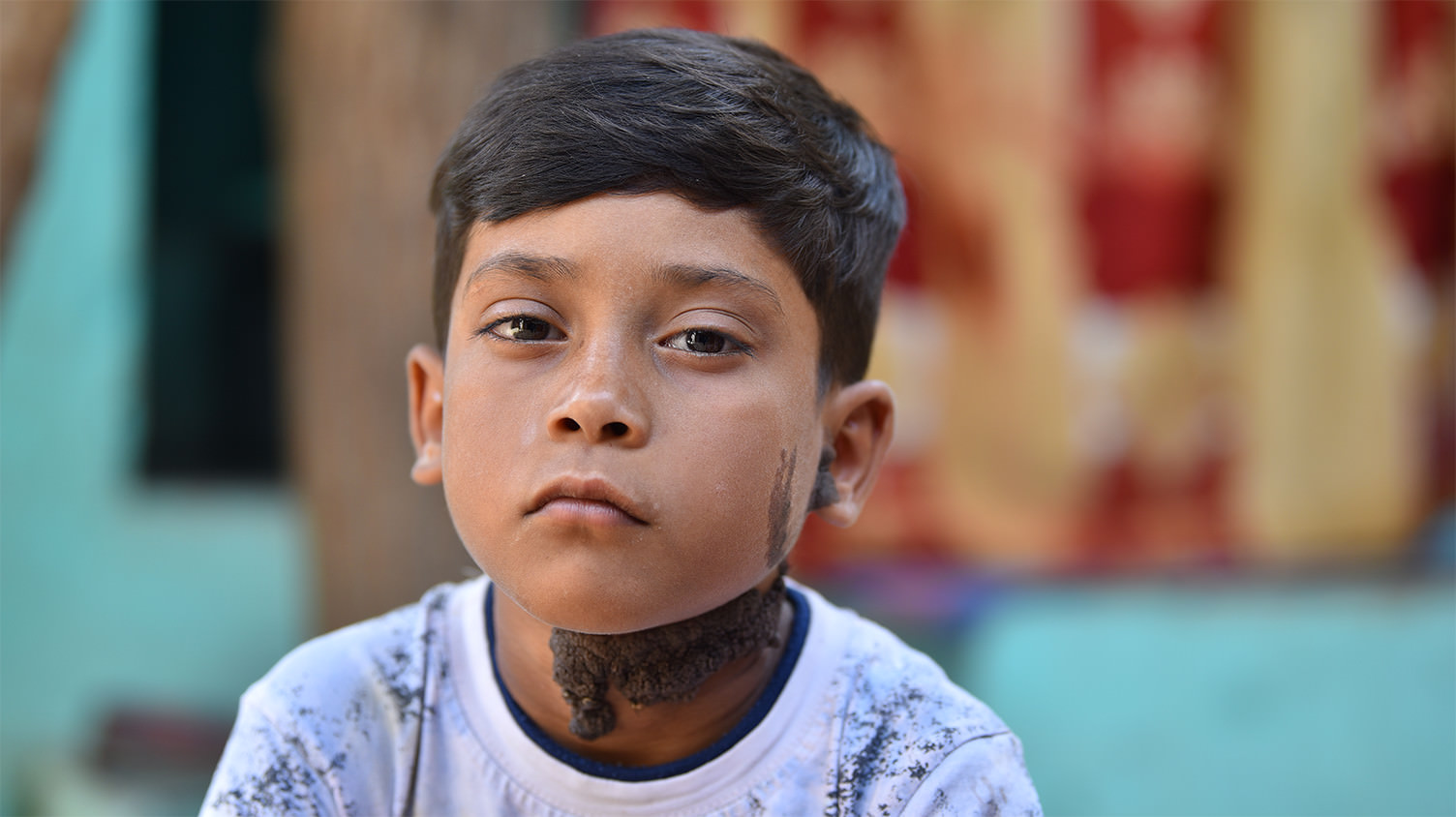 "Of my 9 children, I lost 6 of them, and only 3 are here today  - two sons and one daughter. Everybody told us that we are careless. It’s not the question of carelessness. What are we supposed to do when we have no money? How can we seek treatment for our child, who is suffering so much?" - Femida, mother

Abdul Rahim hasn't had a single moment of respite since he was born, and it is due to a giant mole that has spread across his neck. It could even turn into cancer, if it spreads further. With no means or no friends he can rely on, he lives a life filled with darkness, where he is laughed upon for his misery.

Born with an unusual birth defect, he has a huge mole on his neck

The 10-year-old was born with a small lesion on his neck, that resembled a black spot at first, but gradually grew into a congenital melanoyctic nevus on his neck. The skin disorder involves melanocytes, cells that produce the skin pigment, melanin. On rare occasions, this disorder can also progress and become cancerous, while the growth can cause increased pressure in the brain, leading to headaches, vomiting, irritability, seizures, and movement problems.

In Abdul's case, however, the mole has retained pus and blood discharge, due to which he often experiences pain in his throat, making it hard to swallow and speak correctly. Furthermore, as the skin around the nevus is extremely dry, causing irritation, itchiness and burning, even bleeding at times.

Abdul dropped out of school as he would often be shunned by his classmates, and ridiculed for his condition. No one would let him sit beside them due to the foul smell that his hideous mole emits. The other children's comments would hurt his sentiments, and he would return home with tears, looking for his mother to comfort him. Heartbroken at his predicament, his mother feels helpless, unable to do anything for him.

He sweats a lot, and the smelly mole on his neck attracts flies. Other children at school often tell him that his neck gives out a bad odour, and ask him to sit far away from them. When we can smell it, then evidently, even other people get the stink. But he is our child, and we cannot abandon him. He will be able get a second chance at life, if he undergoes proper treatment." - Femida

Surgery can give him hope of a better life, but his parents don't have the means to afford it

With surgery and a skin-grafting procedure, Abdul can look forward to a happier and brighter future. But his parents are in no position to afford his treatment. Abdul's father, Habiburrahman, works in a mill, grinding flour all day. Yet, his earnings are meagre, and insufficient to support his 5-member family.

Abdul's mother, Femida, is a housewife. These parents have spent everything they had on their son's treatment. But it all went in vain, as there was no improvement. Now, left with nothing, they seek your help.

"My husband is grieving the death of his mother. He has been really depressed and hasn't been able to work for the last couple of weeks. I've had to step in to fill in the role of the breadwinner for the time-being. My son too is miserable - his whole life has been filled with endless suffering because of that mole. It gives him so much discomfort, that some days he is even unable to eat. I tell him I’ll take him to the doctor and get him treated. But, how will I, when we just don't have the money for it? I feel so helpless." - Femida