Papiya escaped an abusive relationship, now she never has to look back. | Milaap

Papiya escaped an abusive relationship, now she never has to look back.

Shares
Shares
Share on whatsapp
Today I was able to meet with a very special woman who has already been through many hardships very early in her adult life.  Papiya Chatterjee is 24 years old and currently lives with her mother and father in the village of Moutha in the Bhirbum District of West Bengal.  I was lucky enough to be able to visit her at her family's residence and discuss  some of the trials, tribulations and successes she has been through in the past few years.
Papiya herself was quite shy and didn't really want to elaborate on some of the things that happened in the past that made her the independent woman she is today but her mother and a few of her neighbors explained her story to me.  Like many young women in India she had an arranged marriage when she was only 20 years old.  She also didn't have much schooling growing up but was good with a needle and thread and often sewed saris for her friends and family.  I found out that her husband was an alcoholic who occasionally worked as a van driver.   His very inconsistent income forced Papiya to start producing paper pouches for local vendors as an additional income source.  The hardest thing to hear about was the fact that her husband constantly physically abused her during his drunken rages.  Luckily her daughter who was only two at the time did not receive the brunt of his rage, but was very psychologically tortured by the dysfunctional and abusive atmosphere in their home.
The sad reality is that this type of story is far too common in many areas in India.  Often times the woman in the abusive relationship has no one to turn to for help and has to suffer through the marriage due to fear and a lack of better options.  Luckily for Papiya she has a family who deeply cares for her and her daughter's well-being.  She was able to remove herself from her depressing situation and moved back  in with her parents who wanted nothing more than for their daughter and grand-daughter to be safe.
Although Papiya was in a much safer environment and her daughter was excited to be with her grandparents, Papiya's financial situation was  still very poor.  Her parents are poor farmers and it was hard for them to provide for their now large household.  Papiya told me she had to go back to producing paper bags which only provided a small income and was not enough to get by.
Fortunately she was introduced to local NGO named Sreejan by some of the other women in her community.  Sreejan, which also partners with Milaap was able help her financially.  Her older brother was looking to open a small restaurant in the city of Tarapith, which is a very important religious destination for Hindu's all over India and a train stop away from  Papiya's family home.  Through Sreejan, and the generous lenders associated with Milaap she and her brother were able to secure a loan of Rs. 15000 to start their business.  She told me that "without this loan [she] was not sure what I would do to make ends meet and take care of her daughter".  She went on to say that the loan money was used to purchase all the accoutrement needed to run a small restaurant like cooking utensils, food supplies and decorations.  She explained that the restaurant is doing quite well at the moment and that she and her brother run it together and have been able to hire a cook.  Papiya comes back to her parents home twice a week to be with her daughter and parents. She proudly explained to me that her daughter will soon be starting kindergarden and that "now [she] can pay for her school fees without worrying about my other expenses". 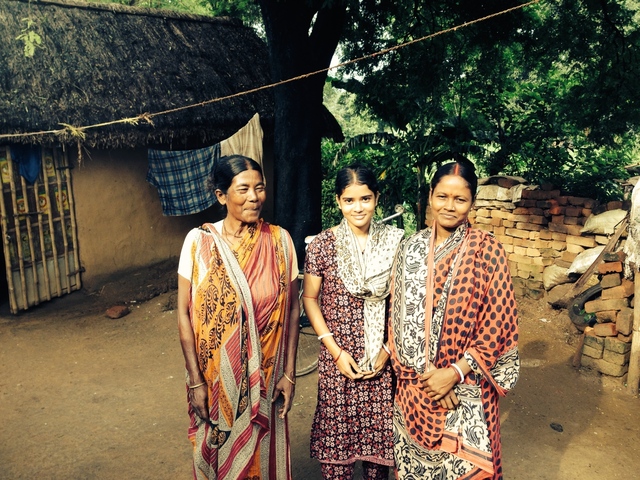 Papiya (center) with two other women from her village