Shares
Shares
Share on whatsapp
The Halima Borrower Group comprises of a group of 21 hardworking housewives residing in West Bengal’s rural South 24 Parganas District. Their professions range from farmers to tea stall entrepreneurs. Not so long ago, their lives were in almost absolute darkness. They only received 2 hours of electricity a day. While they could work during the day, the never ending power cuts hindered their professional activities. For them, substituting health hazardous kerosene lamps for electricity exposed them to too many illnesses and to their families. They had enough. These ladies decided that they needed to borrow loans from Milaap to purchase solar lamps to rectify such problems.
Unfortunately, Group Leader Halima Laskar was no available for an interview. Thankfully, one of the members, Roshida Mullah, was able to inform us on how her solar lamp has impact her life and her husband's.
These lanterns certainly did, particularly for one of the loan group members, Roshida Mullah. A mother of 2 sons, she is also an entrepreneur running a local tea stall with her husband. Prior to purchasing a solar-powered lantern, Roshida and her husband’s tea selling activities were hindered by powercut-hit nights. Although a kerosene lamp would light up the tea stall at night, its lightening was often too dim to make tea. More so, its smoke would make Roshida suffer from heart problems.
Thanks to a Milaap loan, she and her husband are now able to operate at night with bright lightening, without facing the risks of a kerosene lamp. They now earn on average Rs.100 extra from selling tea at night. Their lantern has made a profound impact on their lives. They have even purchased a second lantern to light up their own home. 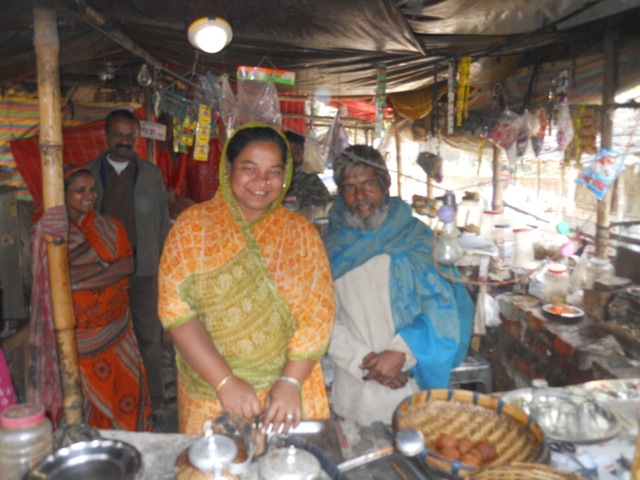 "Can I offer some tea tonight? Only possible with my lantern".- Roshida