By Uthra N
29 April, 2016
Shares
Share on Whatsapp
“As far as I know, most people still don’t have toilets in this village,” Murugavalli Murugagani said. I was sitting in her home’s verandah in the village of Pudhupalayam in Thottiyam. A good-natured woman, she leads a group of five women who had sought housing upgradation loans from Gramalaya Microfin Foundation, a field partner of Milaap in Trichy district. She and I started talking about how she put the loan to use, over glasses of paneer soda.
Murugavalli had initially sought the loan to repair her old home, but the need for a toilet was more urgent and she used her loan money for this. “I have lived in this house for 13 years now, but we managed to source money to build a toilet only recently,” she said, her face a mixture of shame and sadness. Murugavalli hails from a family of five. Her husband is involved in centering work in Namakkal district. She has three children – two daughters and a son. The eldest daughter is in Class 7, the second one in Class 6, and the son attends Class 5. Before the toilet was built, her family used to defecate in the open in a field nearby. The field is less than a kilometre away from their home, and they trekked there every morning to relieve themselves. “It was a big hassle for us,” explained Murugavalli. “Especially with two daughters who are on the cusp of adulthood, privacy was a major issue. And the problem was heightened if we had to go in the nights. We had to use torch lights to guide us to the field.” She also felt embarrassed when relatives came calling and she had to take them to the field for lack of a toilet at her home.
Having had enough, Murugavalli decided to use the loan money to construct a toilet. Apart from the loan amount of Rs. 20,000, she pitched in Rs. 15,000 from her personal funds to finish the construction. It has been a little more than two months since the construction of the toilet was finished, complete with a piped water connection and a water tank. “The loan amount proved to be useful for buying cement, bricks, and paying the labourers,” she said.
Vembu Jayanthi Arulvelan, a member of Murugavalli’s group joined us at this point. She had also used her loan money to build a toilet in her home. Her family comprises her in-laws, her husband, a son, and a daughter. “I built a toilet around the same time that Murugavalli did,” she said. The two families shared the same mason and construction was completed one week later at Vembu’s home. She has been living in Pudhupalayam for six years now, since after her marriage. “Even before my wedding, my maternal home at Paithamparai village didn’t have a toilet. My parents are currently building one,” she explained.
The common thread that united Murugavalli and Vembu was them being part of The Mahatma Gandhi National Rural Employment Guarantee Act, 2005, which promises 100 days of guaranteed employment in a financial year. This clubbed with Nirmal Bharat Abhiyan scheme, needs its employees to have functional toilets built in their homes to benefit from the schemes. While Murugavalli is a supervisor for the employment scheme, Vembu is a labourer. The NBA offers Rs. 12,000 to construct a toilet, and also takes pictures during the construction to ensure that the toilets are fully constructed and operational.
“It hardly took us a month to build the toilet. We don’t have to go out anymore, and I feel more secure about my family’s safety and hygiene after building the toilet,” Murugavalli said, while Vembu nodded in agreement, the happiness evident on their faces. “I hope more people come forward, take up this loan, and build toilets in their homes.” 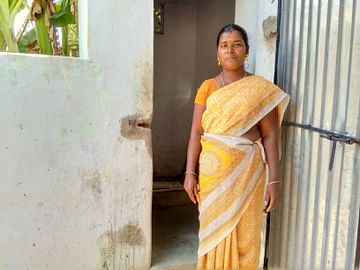