Help this farmer save his 7-year-old son from Cancer

Shares
Shares
Share on whatsapp
“It is very easy for a farmer to get a loan. But afterwards, the farmer is forever in debt, spending the rest of his life making repaying, barely paying back the interest” says Nagaraju, 41. It is a prospect staring him in the face. He is worried that whatever he is repaying will not be enough and he will end up passing on the loan to his children after his death. He has no chance of ever putting together Rs 6 lakhs to pay back his loan. But he has bigger worries eating at him at the moment.

Nagaraju and his wife are agricultural workers from Henchinamane, a small village in Mandya. They work the fields in the sun and earn small amounts each day. They tried to do their best for their two children Nandeesh, 10 and Namita, 6. Their educations were a priority and the parents made sure that their children were happy to go to school.
When Nandeesh's face developed a swelling that wouldn't go away, unending visits to the hospital began. “It started two years back, during Ugadi. We visited at least 7-8 doctors and many hospitals. No one could tell us what the problem was,” Nagaraju says.

Nagaraju borrowed heavily. His son's health was important and money would come again, he reasoned. He encashed all his savings. In a few months, a full-body scan revealed something that could be a cancerous growth and he was asked to take Nandeesh to Kidwai Memorial Institute of Oncology in Bangalore.

In Bangalore, Nandeesh was diagnosed with Acute Leukaemia and started on chemotherapy. By the end of the treatment this year, his father was 6 lakhs in debt. Nagaraju uses all the money he can spare for repaying his loan. But this is not the end of their troubles.
In just three months, Nandeesh's cancer relapsed and he was referred to Narayana Hrudayalaya for a bone-marrow transplant. His mother is a haploid or half match, but the family has decided to proceed with the transplant. The estimated cost of the treatment is Rs 18 lakhs.
Nandeesh lives with his mother in Chandapura, close to the hospital. As they wait for a miracle, Nagaraju is still working in the fields close to Bangalore to keep the family going. But the strain is beginning to tell. “God has given me this poverty and suffering. But it is very painful to be trapped in my circumstances. I think about ending my life, but my children need me. I have no choice but to keep doing what I need to do,” Nagaraju says.

Nandeesh's 6-year-old sister, Namita, has been left in care of her maternal aunt in Bangarpet. She goes to school there and plays with her cousin, but she is also afraid for her brother's life. Every time her parents visit, she cries and begs to come along so she can be with them.
“We had difficulties, but before Nandeesh became sick, we were fine. Even now, Nandeesh is up to his usual antics and I cannot believe all that has happened to us. It is my wife's dull face and my daughter's pleas that makes it real,” he says.
Help this farmer save his child's life and help him through this most difficult time. Donate now.
The specifics of this case have been verified by the medical team at the concerned hospital. For any clarification on the treatment or associated costs, contact the champion or the medical team.Click here to contact. 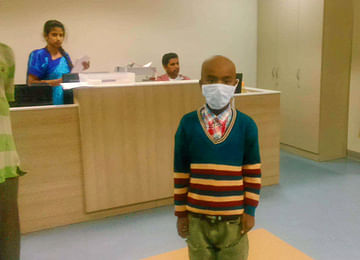 Help Nandeesh get a bone-marrow transplant

Your contribution can help this family save Nandeesh from cancer