3-Year-Old's Tumor Has Damaged His Brain Cells And Will Kill Him Without Urgent Treatment | Milaap
loans added to your basket
Total : 0
Pay Now

You are sending a message to
Naveen Negi
Go back

“When Naman underwent a surgery for his brain tumor, we hoped it would be the end of his sufferings. But it was just the beginning. We believed that the tumor had gone for good, but it has grown back near his eyes and threatens to make him blind. His left side has become weak because a few cells in his brain got damaged. Even after a year, he still can’t walk properly on his left leg and can’t hold anything with his left hand. I don't have the resources to help him win his battle against this aggressive tumor,” Naveen, Naman’s father.

3-year-old Naman’s love for football and running about makes his parents think that he might be a sportsman one day. But all of these dreams may not come true because of Naman’s rare tumor.

“Last year since March, my child would complain of headaches every day before going to sleep. As he loved watching videos on my phone, Babita and I thought his eyesight might have a problem. Over a week or 2 when we were getting him tested, his headaches worsened. The MRI reports slapped us hard with reality- our son had a rapidly growing tumor and needed urgent treatment.”

Despite a surgery, Naman's tumor has come back stronger than ever

Little Naman has craniopharyngioma, a rare type of brain tumor. He had this since his birth, but sadly it couldn’t be detected until he was almost 3. Naman needed a surgery or radiotherapy without any delay. But being a toddler, his body wouldn't have been able to take the effects of radiotherapy. Therefore he underwent a surgery.

“We had no time to waste. Last year in June, my baby underwent a major surgery. After hours of surgery, only a part of his tumor could be removed. We had to go back for constant check-ups. The first 2 MRIs showed that the tumor is not growing back rapidly. We had to wait for Naman to grow a little. But in June when we did his MRI again, it was very late.”

Naman’s tumor has grown back rapidly now. This time, surgery is no longer an option for him. The tumor is very close to his eyes and a surgery has a high chance of making him blind or worse, can even kill him. Radiotherapy is his only option now. The cancer is spreading badly every day. If Naveen doesn’t get his son treated soon, he will lose his child.

“In a situation where everyone loses hope, Babita and I have remained the strongest and are looking forward to take a healthy baby home.  He is becoming weaker than ever, but we are determined to not give up.”

Naveen’s struggles can no longer save his son, he needs urgent help

Naveen works in a private company. He has already spent Rs 7 lakhs and is now struggling to save his only son. He has to take his baby to the hospital every day to ensure that he lives. Now without support, Naveen will not be able to save his only baby from succumbing to this rare disease.

3-year-old Naman is suffering from a rare brain tumor. Even after a major surgery, his tumor is growing back rapidly and will kill him without urgent radiotherapy. The cost required to save him now is Rs 3.5 lakhs and his father has nothing left to save him.

Your support will help this child get rid of brain tumor. 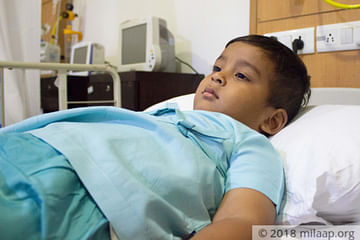 Little Naman's tumor is spreading and will kill him without urgent treatment.

UPI: rzpy.givetomlpnaveenne001@hdfcbank (Copy to clipboard)
Or
Click here to read the instructions before you make a bank transfer.