"My husband has helped form all the JLGs in this area."- | Milaap

"My husband has helped form all the JLGs in this area."- Perabadevi

Shares
Shares
Share on whatsapp
In a little village called Salappatti, some 40 kms from Tiruchirapalli, lives Perabadevi, one of the five women who took a loan from GMF along with four others. I reached her house at around eleven-thirty in the morning. She came rushing to meet me with her 7 months old baby girl in her arm. I played with the child for sometime, while she finished cooking, as I caught her in the middle of that. Her husband, who trades in garlic, sat in one corner sorting huge sacks containing garlic which he had just procured to be sold in the local vegetable markets. She got done in fifteen minutes, though I wished she'd  taken longer just so I could have spent more time with the baby, and sat down with me to answer my questions.

"He is my second husband.", she said, even before I asked her anything. Her first husband passed away a few years ago. She has two kids from her second marriage, two girls. Her elder daughter is studying in the 3rd grade in the local government school. She took the loan from GMF, funded by Milaap, to buy 4 goats; 1 male and 3 female. One of the female goats has given birth 2 kids, a male and a female. The male goats, once they are old enough, will be sold for its meat and will fetch her at least Rs 6,000. The females goats will be sold for close to Rs.7,000 for the purpose of giving birth to more goats. She says she doesn't find it too difficult to pay the monthly installment and that the loan amount if being utilized according to her expectations. She also owns a petty shop, attached to her house, which adds around Rs.1,500 to her income every month.

When I asked her if I could take her photograph with her goats she said they are away at her in-laws place. Since her baby, the shop and her household chores keep her busy all day, her mother-in-law offered to take care of he goats. She also told me that her husband has helped form all the JLGs in the village and spread awareness about the various kinds of loans that GMF has to offer. Thanks to him, many women in Salappatti have been able to avail loans which has helped them start their businesses and provide for their families. With her family behind her to support her endeavors, Perabadevi leads a happy life. 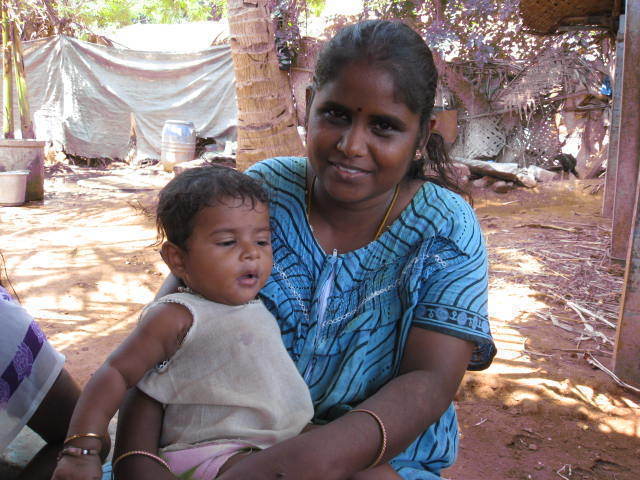 Prebadevi with her baby girl