This 45-Day-Old Baby Requires An Urgent Heart Surgery To Live. Immediate Help Will Save His Life | Milaap
loans added to your basket
Total : 0
Pay Now

This 45-Day-Old Baby Requires An Urgent Heart Surgery To Live. Immediate Help Will Save His Life

Shares
Shares
Share on whatsapp
Ahil is just 45 days old and his heart defect was diagnosed late. His parents took him to a hospital in their town Gonda as well as in the nearest city, Lucknow. Ahil has spent over 40 days hospitalised, being treated for a cold and lung congestion. His condition worsened quickly and he was rushed to Delhi for better medical care. He needs a surgery and treatment to make it.

Ahil's parents could experience the joy of having a new child for only his first 15 days. After that, he developed a very bad cold. Catching a cold in winter is nothing new – newborn babies are especially prone to falling sick. But soon, despite furiously pulling in air – he seemed unable to breathe his parents saw that something was wrong.

His parents took him to the best child specialist in Gonda. The doctor admitted him immediately because the congestion in his lungs was preventing Ahil from breathing. He was given antibiotics for the cold. When he still didn't get better they decided to take him to a better hospital in Lucknow.


Ahil is battling for his life in the critical case unit

Ahil was rushed to Delhi in an ambulance. It was getting steadily harder to maintain his oxygen intake. It was in Delhi that the parents were finally told what the problem was. Ahil's heart had a hole which had filled up his lungs with fluid leading to the severe infection.

“He needed oxygen even while coming to Delhi, so we came here in an ambulance. The doctor here told us that the treatment he got till now was of no use. He told us that our baby was turning blue because he had a heart problem. After spending days watching my newborn struggling to breathe, I wish we had just come here earlier,” explains Suhail.

Ahil's condition is already critical – his surgery cannot be delayed

The doctors advised the parents to immediately get a surgery because it was the only thing that would ease his condition. His mother fainted on hearing the news because she could not imagine that her newborn son has to go under the knife. The last two months have taken a terrible toll on her.

“Even before the stitches from her delivery were dry, Ahil became sick. She's left her daughter with the grandparents and hasn't had a night's sleep since we left Gonda. Every day, we have to keep reassuring her that things will be all right,” says her brother Ateek.

Ahil's mother is still in pain from the c-section she underwent at Ahil's birth, but she stays up with him night and day

Ahil's father Suhail is the sole breadwinner in the family. He works as a barber in a barber shop in Gonda. His monthly income is Rs 6,000. While it was enough till now, it is no where close to covering costs of Ahil's prolonged hospital admissions.

The only reason Suhail has managed to pay for treatment till now has been because he has asked everyone he knows for help.

“Every one I ask lends me Rs 5,000-10,000. You can imagine how many people I have begged for money. It is only through God's grace that I collected Rs 1.5 lakhs and kept him alive till now,” says Suhail.

Suhail and his wife  are mentally and physically exhausted and have nothing left to gather anymore for his surgery and post-operative care. They have already used up the money Suhail collected and need another 1.5 lakhs. They are only praying for a miracle that will let them save their baby and give him a chance to live.

As each minute passes Ahil's life is in danger. His parents cannot imagine losing him after everything he has gone through for the last 45 days. Our support will save this newborn's life. 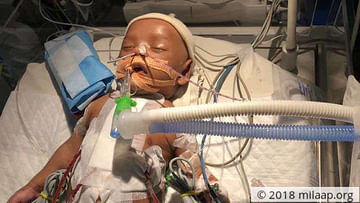 45-day-old Ahil was born with a terrible heart defect