Help 3-year-old Sufian Who Has Been Fighting Blood Cancer For Most Of His Life | Milaap
loans added to your basket
Total : 0
Pay Now

s
You are sending a message to
sravanthi
Go back

Shares
Shares
Share on whatsapp
3-year-old Sufian had recently started going to playschool. His parents, Rizwana and Shareef, were excited at their child's new step in life. Little did they knew that their happiness will be shortlived. In June, Sufian was diagnosed with blood cancer and life hasn't been same ever since.

It all started when Sufian complained of recurring fever. The family, belonging from a small village fo Tamil Nadu, took him to a local doctor. Upon consultation, the doctor put Sufian of medicines for viral fever. However, even after months of feeding him tablets, Sufian's fever wouldn't go away. Simultaneously, he began appearing extremely weak and would hardly take any food. The family again took him to the local doctor who now asked of Sufian to undertake a blood test. The result of the test, however, had the entire family hurrying to Bangalore.


It was after that they reached a known hospital in Bangalore, did they realize the gravity of the situation. Multiple tests later, Sufian was identified with blood cancer. He was immediately shifted to American Oncology Department, Hyderabad and put on the rigorous dosage of chemotherapy.


"We sold our everything back home and moved to Hyderabad to make sure our son gets timely treatment. 6 months down the line, we are back living in a rented place in our village because we no longer have the money to continue our son's treatment", said Sufian's mother, Rizwana.

The family has so fared spent Rs 6 lakhs on the son's treatment. To have a fair chance at survival, Sufian has to continue his chemotherapy for next 2 years, the total cost of which will be Rs 15 lakhs. Sufian's parents have sold their house and spent all the money of their son's treatment so far and now have absolutely nothing to go on. His father is a driver by profession and barely makes Rs 5000 per month. His mother is a homemaker. He has an elder sister who is 5-year-old and goes to school.


"He keeps asking me what is wrong with him? Why is he made this way and why won't his fever go away? We haven't told him or his sister anything about cancer. They are just kids and don't deserve to worry about something this serious. He thinks its just a fever and will go away once his injections get over. With all my heart, I hope it does", said the mother.

Sufian is just 3 years old and has a whole life ahead of him. He is very close to getting cured and if he undergoes complete chemotherapy course, he has a good chance of survival. Our support will make a huge difference and save a life. With no roof over their head and no fixed job to fix their lates, the family is finding it difficult to arrange for 15 lakhs required to save their son.  Funds raised through this campaign will go towards his treatment.

Your contribution can save little Sufian from pain and help him defeat cancer. 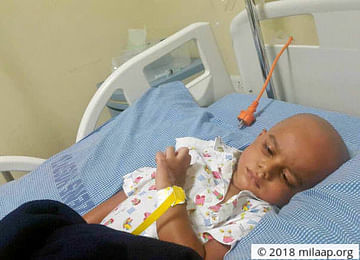 Sufian has been fighting blood cancer for sometime now and needs our help to survive.