10-year-old Ataur Screams In Pain All Day And Needs Your Help To Defeat Cancer | Milaap
loans added to your basket
Total : 0
Pay Now

Shares
Shares
Share on whatsapp
10-year-old Ataur looks at his mother, his eyes reflect the unbearable pain. His mother, Hasina, sits frozen as her son cries in pain. Her heart aches to see the little one she has given birth to suffer from cancer but she cannot cry anymore. It's like she has shut the world out and accepted the thought that she cannot save her son. But little Ataur still has hope.


Sadim is a schoolteacher and he didn't realise his life is going to change forever. For a month he managed Ataur's treatment but as days passed by he realised there is very little he can do with whatever meagre income he earns.

No one in Ataur's family ever imagined that there was such a deadly reason behind his recurrent fevers. The whole family broke down after knowing that little Ataur has cancer.  After taking treatment for a month, the doctors advised his family to seek a place more equipped to deal with cancer in children as his cancer is looking dangerous and has the potential to spread throughout his body.

Sadim didn't think twice, he begged and borrowed and took out all the cash he had to send Mohammed, his wife Hasina and her nephew Saleem to Bangalore. As much as he wanted to be with his son, he decided to stay in Chittagong and earn money that to send for Mohammed's treatment.

Mohammed does not really know what cancer is. But for his aggressive cancer – he is being given very gruelling chemotherapy. Having spent the last six months in the hospital, he is now very homesick now. Though he is too unwell to even walk – he is coping with his condition by penning letters for his school-friends back home.

Mohammed is not the only one who misses home. His mother Hasina is stricken at seeing her baby suffer so much. “There are days when he keeps repeating 'It hurts'. Part of him that is still a child probably feels if he just went home everything would be all right. But we can't go home,” says an emotional Hasina.

Every day is a struggle in this big, new city

Hasina saves most of her strength to encourage her son through his painful treatment. The treatment is taking a heavy toll on Mohammed. He has body ache, loss of appetite and a lot of vomiting as side-effects from the chemotherapy. Since the next round of chemo will be stronger – things will only get worse.

Sadiq could only give them Rs 50,000 when he first sent them to Bangalore. It was all he could manage with the other expense of sending them to Bangalore, in this short span of time. With his modest salary – the only money he has is what he has saved over the years. All that money is long gone spent on room rent and hospital expenses. Some days, there is nothing to even eat.


Sadiq has spent lakhs on Mohammed's treatment so far. He has asked everyone he knows to help him save his son. That is how he managed treatment till now. But the situation is getting worse with treatment estimated to cost Rs. 32 lakhs and he is running out of people willing to help him. He is now desperate to save his son and raising funds online is his only hope.

Mohammed needs chemotherapy for two more months after which he needs a bone-marrow transplant. This is an expensive procedure and the family is in no position to afford this treatment. Mohammed's parents are financially drained and have no avenues left to arrange for the funds.

Your funds will give a bright, happy 10-year-old a chance to beat Cancer and live a normal life. 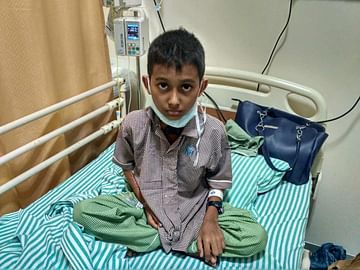 Mohammed has come to India to beat his Cancer. Help him complete his treatment and get better