Meet Laxmiben, the breadwinner with hands that craft | Milaap

Meet Laxmiben, the breadwinner with hands that craft exquisite hangings

So when it comes to visiting a borrower from Prayas, there’s one thing that tends to be inevitable: the tales of these women entrepreneurs that never cease to inspire me.

On one of the Wednesday afternoons that I was in Chandkheda, an area in Ahmedabad, Gujarat, the weather Gods seemed to be working in my favor. In the past few days, Gujarat had witnessed a ginormous amount of rain, but that day was different. I was accompanied by Mr. Rahul, one of the staff members of Prayas. And I was here to check on the progress of Siddhraj Mahila Mandal, a group being led by Laxmiben, after they had borrowed a loan for enterprise development.

Laxmiben, a 47-year-old woman has been running the business of selling sarees and traditional handcrafted decorative hangings for a year now. She talked at length about both her businesses. As far as the hangings are concerned, I would undoubtedly say that they were pretty little things. Laxmiben gets the raw material and then makes them all by herself at home. She gets her stock from places nearby such as Kalupur and Bapunagar. As she talked, I couldn’t help but notice her big smile, one that reached her eyes.

Learning to deal with and overcoming adversity is what made Laxmiben who she is today. Her husband suffered a heart attack a few years back, after which he had to stop working and was confined to bed because of his impaired health. The news devastated Laxmiben and her family. But she being a strong woman didn’t let this dampen her spirit. She decided to start her business. One of her sons had to also leave school and help in supplementing to the family’s income. But she gratefully added that it’s only after the loan from Milaap that her business saw an exponential growth. And now, she is able to meet all her household expenses. Every month she is able to earn a sum of Rs. 4000.

Laxmiben dreams to expand her business further. This woman is admirable and so is her willpower. I am hopeful that her saris and pretty little hangings are going to make her very successful. 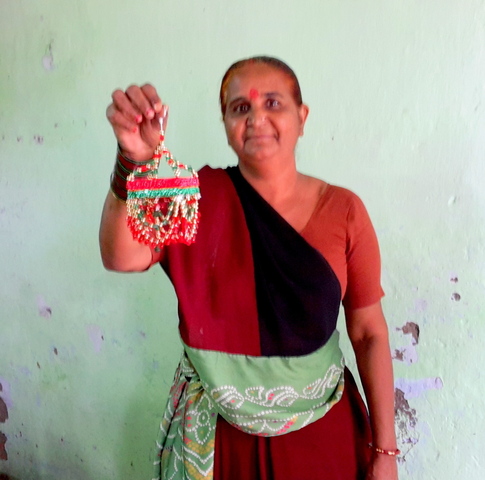 Laxmiben shows one of her handcrafted traditional hangings