After Swallowing A Battery, 1-Year-Old Virat Battles To Survive In The ICU | Milaap
loans added to your basket
Total : 0
Pay Now

After Swallowing A Battery, 1-Year-Old Virat Battles To Survive In The ICU

"There isn't much we can do other than be by his side while he is in so much pain. We don't know what will happen but we just hope to bring him back home, healthy and smiling," said Virat's mother, Khusboo.

After mistakenly swallowing a battery cell, 1-year-old Virat's stomach was burnt and after spending months in the ICU, he lost almost half his body weight. His life is still in grave danger and he needs an urgent operation to get better but his family's financial condition is making this all the more difficult.

Virat is on feeding tubes and is very weak

In November 2017, Virat suddenly started choking and developed a severe cough and fever. Shocked at the sudden coughing, his parents rushed him to to a nearby hospital. Upon reaching there, the doctors immediately moved him to the ICU.

An endoscopy showed that Virat had swallowed a battery cell and it had burnt his insides. It was removed but he couldn't breathe and had a severe infection in his stomach. He breathes and feeds through tubes and in just a few months he has gone from weighing 15 kgs to just 7 kgs. Now, he is extremely weak and is in urgent need of an operation to live.

"Doctors tell us that they are not sure when he will be back to normal. They say his infection is dangerous and he needs a lot of medical care to ensure survival. Its already been a month, and we don't know how long it will be before Virat can even speak," -Khusboo.

Virat is too weak to even walk

Even after being in the ICU for over a month, Virat is hardly able to walk. His limbs are extremely weak and he's nowhere close to being a normal, active 1-year-old.

"Virat can only sit and sleep. He's too weak to walk. He barely plays too. Watching him suffer this much and worrying about the costs has made me lose my appetite too. My mind has just stopped functioning normally. You can ask my coworkers how I am at work these days. I just want him to get better and if I have to sell my small house, I'm prepared to do that. I just don't know if it'll be enough." - Satinder, Virat's father.

Virat is the youngest child of his parents. His father, Satinder, is a laborer at a small powder factory and earns just enough to run the family. Khusboo is a housewife and together, they're barely able to save. To provide for Virat's treatments up till now, Satinder has begged and borrowed from not only his friends and family but also from his boss, and hospitals too.


"Even if I sell all our belongings, it wont be enough to pay for his treatments. It feels like I have the heaviest burden in the world but I just want to somehow save my child from this painful situation." - Satinder

Virat was in the ICU for over a month now and needs continued ICU care and a surgery to get better. The total cost for all of this is estimated to be around Rs 13 lakhs. Satinder has absolutely no one left to ask for help and has exhausted all he had.

Virat needs the corrective surgery soon and his family is running out of time to arrange the funds they need.

1-year-old baby, Virat, has suffered a lot. His parents' financial condition is very poor but they're still trying their best to keep him in the hospital. Virat's throat was burnt by the chemicals in the battery. After spending over a month in the ICU, he has lost more than half his body weight. For a 1-year-old, this is life-threatening and he urgently needs a corrective surgery. His parents have exhausted all they had and need your support to save their baby.

Your support will help Virat get the surgery he needs.

Specifics of this campaign have been verified with the concerned hospital. For more details, please contact the campaign organizer or the hospital. 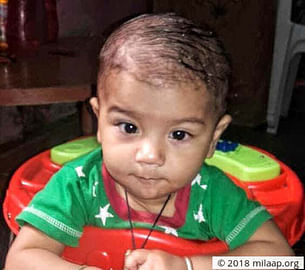 After swallowing a battery cell by mistake, Virat needs an urgent surgery to survive.