Master of many trades, Lalduhsaki says that she is not afraid | Milaap

Master of many trades, Lalduhsaki says that she is not afraid of working hard.

Shares
Shares
Share on whatsapp
I met Lalduhsaki in the afternoon at her friends place, where she came after selling vegetables at the roadside corner in the bazaar. She had collected the week's stock for her friend. She sold vegetables, when she was relatively free and wanted to earn extra money. She boldly said, "I am not ashamed of doing any kind of job, we need to work hard to earn money". I nodded with a smile and asked what are the other things she does. She happily started counting that she has two poultry sheds, she deals in supply of wood from the villages to Aizawl, makes dry flowers, supplies second hand clothes to women, makes pickles and also sells vegetables whenever she is free. She added that she wanted to capitalize on all the opportunities that came forth.
Lalduhsaki took a loan of Rs 15,000 in August last year to invest in her flower making business. She bought materials for making flowers and sold finished products to shops and nearby villages, but things did not take off as she had planned. So she invested a large portion of the money in buying chicks from the market. She already had a small poultry shed and constructed another one for the additional 30 chicks that she bought. She excitedly adds that she sold all her chicken and plans to buy new set of chicks from next month. She sold that meat herself, by sitting on the street corner on Saturdays. This helped her get more profits rather than selling the chicken at a meat shop. Along with running the poultry she also took orders from wood dealers in Aizawl and supplied them wood from the nearby villages. She also makes pickles and sells them at the bazaar.
Lalduhsaki lives with her daughter and her husband. Her daughter is nineteen years old and is studying to apply for an admission in Aizawl Nursing College.  Her husband is employed as a driver and drives the Sumo' s, plying between Aizawl and Guwahati. Lalduhsaki is definitely a woman of many trades who believes in saving and reinvesting while earning. 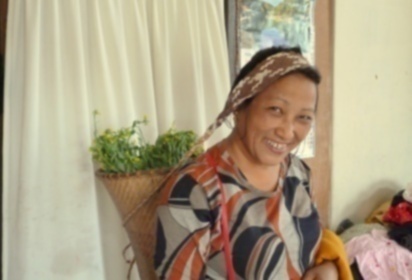 Lalduhsaki smiles with her vegetable basket