The field visit where I got a Marriage Proposal | Milaap

The field visit where I got a Marriage Proposal

It was my third field visit, and it started on a very different note. I didn’t get a confirmation a day before, so I was under the impression that the visit was cancelled. It was a Saturday, and I was enjoying a lazy nap, when suddenly my roommate gave me her phone and told me Arun Sir wanted to talk to me. I needed to get ready in half an hour and leave for a village 20-25 kms from Balangir town, where we stayed.

I skipped breakfast and left. The field officer arrived and our journey started. We left the town and got on the road carved between farms. It was a golden January afternoon and the weather was very, very kind. Farms were spread out on all sides and the hills rose out of the west. The field officer answered all my questions about the crops. He lamented that slash and burn agriculture was still predominant in this area. People grew rice in one season, burnt it and grew vegetables on that for the next season. Here is a picture of our scenic route:

After an hour, we reached the borrower’s house. But the focus of this story is the second set of borrowers that we met in that visit. We left the first borrwer's home and reached the other borrower's place by 4. This set of borrowers lived in the village Ghungi. When we stopped outside the borrower’s home, three women sitting on a cot, greeted the field officer. The field officer asked them to call all the borrowers, while he also went away to call some of the borrowers. In the meant time, the women tried to communicate with me. Sadly, I didn’t know their language and they didn’t know mine. So we end up saying whatever we thought was right, I hope. I was relieved when the field officer came to my rescue.

It was decided that we should meet at Minati Malik’s house. We saw heaps of rice spread on the floor on the left side of her entrance. It was a big space with a lare veranda. The veranda itself looked a little like a mini nursery. It had a thriving vegetable patch, with different peas, cucumber, gourd etc. Two ducks and two hens also live among the plants. Their chicks were roaming around doing what they do best - clucking shrilly and looking cute.

We then sat down and began discussing the loan they had taken for solar lights for their home. Though we couldn’t understand each other, there was a warmth that tinged the conversations. I had never had such a happy conversation with a bunch of strangers in a language I don't understand. In fact, the women seem really happy even without a lot of the things that most people cities take for granted. We spoke for an hour, and then Minati Malik asked us if we wanted tea. Given the fact that I hadn’t had anything, I simply did not have the strength to refuse to this offer.

So, we had some tea. I was also given a tour of the vegetable patch where an old lady proudly showed me the small, edible cucumbers, peas and gourd that they were growing. She even plucked a sample for me to try. This was a moment when I saw with startling clarity the meaning of Atithi Devo Bhavah (Treating guests like God). They did treated me with warmth, happiness, love and kindness.A combination that is tempered by doubt and suspicion in cities.

As we got up to leave, one of the women wanted to show us her fields. Wanting some more time of this easy camaraderie, we agreed to that proposal. Minati Malik offered to put us up for the night, since it was getting a bit late. Then she added something in Oriya at which everyone around me laughed. On the way to the fields, I asked the field officer what had been said. He laughed again, and told me Minati had said, if she had a son of that age, she would have liked a daughter-in law like me.

I was a bit befuddled. It was the first marriage proposal I had got and I had not even understood it. I settled on feeling flattered. But on later reflection, I realised what it was about this that gave me such a warm, memorable feeling. It was the gesture of wanting to add me to their community in the way that they understood best.

We then left her house and went to see the other borrower’s fields. She took a good 15-20 minutes carefully selecting the right brinjals for us. She plucked 5-6 brinjals and gave them to us. Below is an image of that woman in her fields.

As I left that village, my eyes had opened up to the real nature of field visits for a fellow. While as a fellow, I would need to take away details of what was done with the loan and send out an update. The bigger takeaway for me which would last me the rest of my life was this experience of a warm welcome. Being told that I could stay for as long as I liked. That me staying would make a difference to their lives.

One often reads about the generosity of the farming class, but this was the first time I had come in contact with it. Despite their problems, the people are satisfied, happy and one saw a lot less hypocrisy. It was a whole new way of understanding life, and this is what I wanted from my fellowship in Milaap. A truly memorable visit. 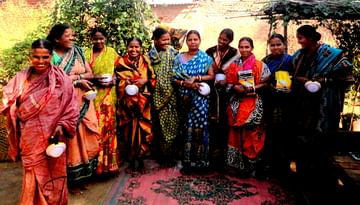 The field visit where I got a Marriage Proposal

If you like this story, then lend these people a Solar Light or even an education loan!

Donate Learn more before you Lend
OR