M
You are sending a message to
Madhuchandan
Go back

Madhuchandan Chikkadeviah is a software engineer who was living the good life in California. He had a good job and was comfortably settled there but always felt the call from back home – Mandya, Karnataka.
Madhuchandan's family was always closely associated with farming. His father was the vice-chancellor of the University of Agriculture Sciences, Bangalore. It was in this lush 1,200 acres where he spent his formative years, listening to the land. His family also owned fields in Mandya, but he chose a career in engineering over tilling land.
After completing an engineering degree, Madhuchandan co-founded a company and then, when it was running independently, he decided to work outside of India, with the best software engineers in the world. It was here that he finally realised what he really wanted to do.
“I wanted to restore dignity to the profession of farming and reverse the trend of farmers migrating from rural areas” Madhuchandan stated; this continues to be his mission even today.
In 2014, Madhuchandan quit his job, leave America, and come back to Mandya and become a farmer. By 2015, he had founded the Mandya Organic Farmers Cooperative Society and was working tirelessly to support farmers in the region switch to organic farming. His passion for improving the lot of the farmer is what drives him.
“Experiencing life abroad made me see how unfair life can be back here in Mandya. I wanted to come back, and create a lasting, positive change in their lives,” he explains.

Farming as a profession has been on the decline. It is no longer a job with stable returns. Particularly among the young, agriculture is a burden that takes them away from the aspiration of a good life.
Madhuchandan, was one of the many that left for the city. Low selling prices, decline in soil fertility, uncertain returns have driven many potential farmers to the city. The ones that remained were vulnerable to being caught in vicious debt due to crop failure.
Madhu founded the Mandya Organic Farmers Cooperative Society to help the farmer directly reach the consumer and get a fair price for produce. It was then that he discovered that the heavy use of fertilisers had degraded not only the soil, but irreparably damaged the local eco-systems that are crucial to organic farming.

Water is the heart of rehabilitation:

Maragondanahalli Lake in Mandya in Madhu's words is “95% dry.” This once majestic lake once occupied 32 acres but has since lost at least 8 acres over the years to encroachments. The lake is also choked with silt. If the silt could be removed, and a green barrier set the boundaries of the lake, it would prevent further encroachments.
This silt could be used to partly restore the damaged soil of the region and support organic farming. Rejuvenating the lake not only ensures a source of fresh water but also promises to bring back to life the functioning ecosystem of the lake.

What do we gain?

The clean up and restoration of Maragondanahalli lake will directly benefit local farmers, but will also become the model to restore ecological balance in other regions of Karnataka. That large quantities of nutritional soil will be gained is an added benefit. But what Madhuchandan is most excited about are the non-tangible benefits of restoring the lake’s ecosystem.
Lakes are highly complex, functioning ecosystems that are home to an unimaginable number of organisms; restoring this ecosystem will bring essential organisms that aid farming processes back to the area.
The revival of a lake also plays a part in increasing the water table, the amount of wildlife in the area, and the presence of native flora and fauna. Located next to Karnataka's well known bird sanctuaries – Ranganathitu and Kokkarebellur, the lake could even attract rare migratory birds.

How you can help:

Madhuchandan requires funding to hire machinery to pick up the silt and transport it to various farmlands. He also intends to use any funds raised to aid farmers in purchasing the de-silted soil from the lake at only Rs 70 per truckload. Many farmers cannot afford this expenditure and hence need your help. This initiative makes the most out of an attempt to repair our damaged environment; and can be instrumental in the mission to restore natural ecosystems that we take for granted.
Click here to know more about Madhuchandan and support his cause.
Donate 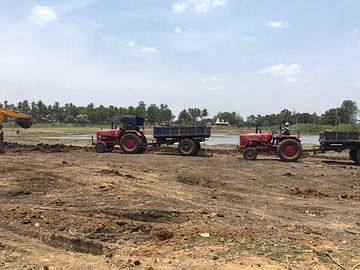 This lake in Mandya is dying. De-silting will rejuvenate the lake and provide farmers fertile...