Kulsum can sell vegetables at night under her Milaap solar | Milaap

Kulsum can sell vegetables at night under her Milaap solar lantern

Shares
Shares
Share on whatsapp
In rural West Bengal, housewife, Kulsum Mir, leads a group of women residing in her village who have borrowed loans from Milaap to buy solar lanterns. Unlike most of Milaap’s female borrowers from rural West Bengal, she is not so entrepreneurially inclined. She does not run her own business, or garment store, or even a tea stall. Initial impressions show that she is just a simple village housewife who assists in her husband’s vegetable shop. He is a farmer who grows vegetables, which he of course sells at his vegetable shop. They both have 5 children, 2 sons and 3 daughters, who all attend school.
Before purchasing a solar lantern, Kulsum and her family were unable to carry out their activities in the evening when daily electric power cuts (lasting an average of 3 to 5 hours) occurred in their home. In fact, due to expensive electricity bills, the vegetable store had no electric connection at all, irrespective of any power cut. The only viable alternative for lighting was a kerosene lamp; which was used at the store. It was also used as the primary lighting for her children, when they were studying at night. Unfortunately, the whole family, including Kulsum, suffered from respiratory infections, caused by the noxious kerosene fumes from the lamp. As Kulsum and her husband struggled to breath, they had to often close their vegetable store early.
That all changed 8 months ago, after Kulsum’s request for a Milaap loan was granted by local Milaap field partner, DCBS. With her loan, she was able to buy a solar lantern. She hoped that the solar lantern would solve her issues and those of her family caused by the kerosene lamp and power cuts. She is so happy that her assumptions were proven correct. The uninterrupted, bright lighting from the solar lamp enables her to sell vegetables at her husband store in the evening, regardless of the power cuts and without the associated risks of their kerosene lamp. As she is now able to sell more vegetables during this time, her family’s average monthly income has increased by Rs.500. Her children also no longer suffer when they use the solar lantern during their evening studies.
Kulsum pays Rs.200 in monthly instalments to repay this Rs.1600 loan. She still owes Rs.960 for the loan, which is due in 3 months’ time. In the meantime, she is so happy at the wonders her solar lantern has brought to her and her family, that she has borrowed another loan for a second solar lantern. 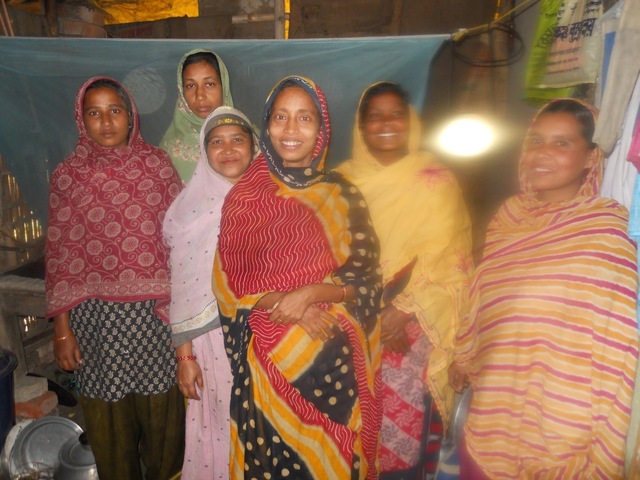 Kulsum (centre) accompanied by other group borrowers in her home, with her lantern hanging.