Shares
Shares
Share on whatsapp
In her home in rural West Bengal, daily power cuts at night have always been an issue for 12-year juri worker veteran, Chakina Laskar. However, that was not her biggest concern. It was her main alternative lighting source in her home during such occurrences, which endangered her life and those of her 2 daughters’- a kerosene lamp. She often lit up the kerosene lamp while embroidering zari on saris. The kerosene lamp would sometimes spill onto her saris, burning them. This curtailed her juri productivity. Her eldest daughter, who assists on her zari work, used to also face the same hurdle. Over that, whenever she cooked dinner for her family under the kerosene lamp, the occasional kerosene oil spills would lead to the oil mixing with the food. Dinner would become inedible and she had to cook all over again. The kerosene oil spills became so severe that she forbade her younger daughter, a school student, to use the kerosene lamp at all for night studying.Chakina and some of her lady neighbors, who were facing similar issues, got fed up. Their solution was to acquire solar lamps to replace their kerosene lamps. They congregated as a Milaap borrower group. This enabled them to collectively borrow a loan from Milaap for the purchasing of solar lamps for themselves. Chakina happens to be leader of this group.Like her compatriots, Chakina has not regretted her decision. She strongly feels that her solar lamp has improved her life and that of her youngest daughter. Before using a solar lamp, Chakina could only make 2 saris on average a day; and sometimes none, whenever a kerosene oil spill occurred. She can now make 3 saris a day. She therefore earns more money as she sells more saris. Her daughter, on the other hand, is able to study at night under the lamp, without the threat of kerosene oil spills. Chakina is so happy that her daughter’s grades have now improved. She thinks that her solar lamp had a part to play in this 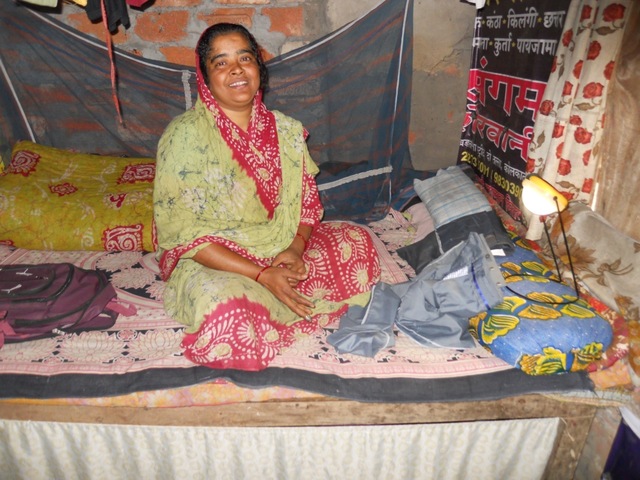 Chakina so happy that she can carry on with her zari work without her saris getting burnt.