With An Earning Of Rs 200 Per Day How Can This Day Labourer Save His Child From Blood Cancer | Milaap
loans added to your basket
Total : 0
Pay Now

You are sending a message to
Dr. Vijay bairagi
Go back

"I feel like a failed father, I have two kids and I am unable to take care of all their needs. Neither can I let my daughter go to school nor can I save my dying son" - Kamal Ram Chandra Kartik' Father

Kamal has been in a constant distress for a while now, a day laborer who makes 150 - 200 rupees daily depending on the type of work available has to now arrange 7 lakhs for his son's treatment. He is not even sure whether he will get to work and earn the very next day, but then he has to arrange money so that he can save his child from blood cancer.


For Kamal even managing daily expenses is a challenge and now he is running pillar to post appealing to everyone he meets in hospitals, government offices, at his work in helping him arrange funds. However, there is a strong possibility he may not be able to arrange that sum.

I can beg and I might borrow but I can't steal

Kamal's financial condition is extremely bad. Such situations make people take extreme measures and he also had to.

Kamal feels extremely sad and disheartened to not being able to let her daughter continue her schooling. His son's treatment has made him exhaust whatever savings he had, Kamal understands the value of education, he always wanted to give education both of his children however with no money left to support the studies he eventually had to stop letting Gayatri study.

"I have a family to look after and feed, I don't know how and from whom to steal from neither my conscience allows me to do it, I have no option left to take care of expenses I have borrowed money in the past and can try borrowing again or I can make my family come to streets and beg so that we can save our child"

Kartik at the beginning of this year complained of lumps in his throat. He was taken to small hospital in Nisarpur District of Madhya Pradesh where the family hails from. The doctors did a misdiagnosis as Tuberculosis and gave medicines to treat them however eventually the condition worsened and eventually the doctors had to perform a throat surgery.
The surgery relieved Kartik from pain, however, is few days lumps again surfaced on his neck, Doctors with preliminary tests ascertained it may due to a blood cancer and referred his case to CHL Indore. It was then identified that Kartik was suffering from Hodgkin Lymphoma (a type of blood cancer) which mostly affects areas around the neck.

Kamal was advised that in order to save Kartik chemotherapy will be required and will cost him a huge amount of money.

The family had already undergone great trauma for arranging funds for his initial surgery, the new diagnosis has been extremely demotivating and depressing.

A father wants to save his child and has been trying all the means to arrange money for the treatment. However, since he is a day laborer he means and options are extremely limited.

The child immediately needs to start getting chemotherapy so that he can be saved however the cost implications of seven lakhs is beyond Kamal's reach.

Your contribution will ensure a life is saved and will give hope to a family who has suffered a lot in the last 6 months. 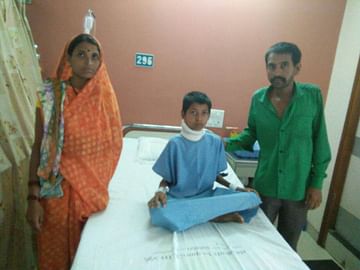 Kartik can only be saved by arranging funds for his Chemotherapy