Kapilaben: Entrepreneur and Epitome of Strength

Women in the 21st century are truly independent for the first time in social history. And they have finally kicked off the shackles of dependence on men. The scenario is changing at a rapid pace in rural India too. Kapilaben, a woman from Chandkheda, stands as an epitome of this. Chandkheda is a district in the northwest of the metropolitan city of Ahmedabad, in Gujarat. I was here, accompanied by my unit branch officer from Prayas, to check on the progress of Riddhi Mahila Mandal, being led by Kapilaben, after they had borrowed an enterprise loan from the Milaap community of lenders.

Kapilaben, a woman in her thirties, went through a lot due to the separation from her husband. But that did not deter her spirit. Instead, that made her more strong and self-dependent. With two beautiful children to take care of, Kapilaben made a decision two years back, to start a business of her own. She started a shop of her own and is into selling novelty items, imitation jewelry, and beauty products.

With her loan from Milaap two months back, she was able to add inventory to her business and expand it further. Previously she was able to save a meager sum of Rs. 500. But now, there has been a significant increase in it, with the growth in business. During the time of festivities and occasions, she tends to make a profit of Rs. 5000 from her business.

Kapilaben intends to grow her business further. Her children are her constant source of encouragement and support. She wants to see them as successful beings. The loan from Milaap acted as Kapilaben’s ray of hope. Not only did it brighten her life, but it also strengthened her. 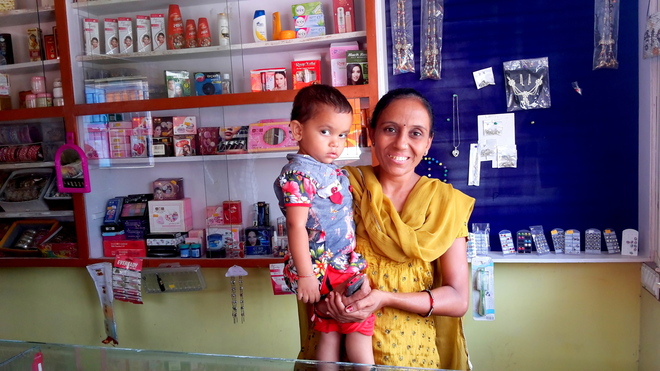 Kapilaben with her niece at her shop