Shares
Shares
Share on whatsapp
Carrying her 15-day-old son, Sameera went to the family elders.  It’s winter, give him some time. Jaundice doesn’t subside soon in winter. Sameera knew her son’s condition was becoming worse. Defying her elder’s suggestion, she took her baby to the hospital.
Doctors told her Jaundice was not the real problem, her newborn’s liver was affected. Kabir is now 3 years old.  He needs a new liver to live.  But Sameera and her husband are left with no money to pay for their son’s liver transplant.

After a successful surgery, Kabir was left with only one option to survive

Kabir was diagnosed with biliary atresia few days after his birth. Doctors recommended that he undergo the Kasai procedure. But this procedure was critical and if unsuccessful, only two options were given- an immediate liver transplant or if he is stable, a transplant after he turns 3 years old. To the family’s horror, the procedure was not successful but fell in criteria 2. Doctors said he needs to under a transplant after turns 3 years old.
From that day started Sameera’s and Nayeem’s run to raise money. They received estimation from various hospitals and the cost for hospitalisation and transplant went upto to 25 lakhs. Nayeem was the only earning member. They decided that only way they can manage his treatment till turns 3 and the arrange the transplant one is if Nayeem gets a better paying job. They also have a 6 -year-old daughter to take care of. Nayeem decided to try to get a job in UAE. After 3 attempts, he got a Visa and went to UAE few months ago, only to realise he didn’t receive the job he was promised. He was given the executive role of a financial firm. He had to take the job even though his pay was much lesser than promised. He didn’t have money to return home.

His mother will donate her liver to see him alive

Back in India, Sameera waited for the monthly savings towards Kabir’s transplant. Someone needs to donate liver for Kabir. Fortunately, Sameera is a full matched living donor for Kabir. “This is my chance to do something to save my son. I have seen him suffer since he was 15 days old. I want to see him recover and have a normal life. As a mother, that’s all I pray for, to keep my son alive.”
Kabir is being treated by liver care doctors in Aster CMI hospital, Bengaluru. After knowing about Kabir’s family situation, the team of doctors has decided the perform his liver transplant at a reduced cost of 12.5 lakhs. This has been a huge relief for the family who was struggling to arrange for the money. They have managed to collect 2.5 lakhs' But they are unable to collect the rest of the amount.

How You Can Help Kabir Survive

Kabir's parents are trying their best to arrange the funds for his transplant. But they are unable to arrange for the entire amount. They have managed to raise 2.5 lakhs. With our support, Kabir's transplant will be completed without any delay.

Click here to make a contribution and save Kabir's life
Donate 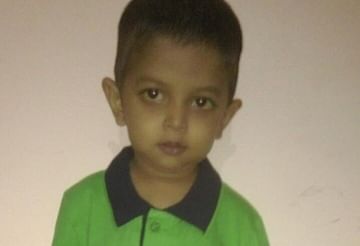 This is Kabir's last chance to survive. He needs an immediate liver transplant

Kabir has been fighting two liver conditions since his birth. He needs our help to survive and...