Jaishree's Parents May Not Have a House When They Go Back Because They are Helping Their Daughter Fight Brain Disease | Milaap
loans added to your basket
Total : 0
Pay Now

You are sending a message to
VENKATESH
Go back

Shares
Shares
Share on whatsapp
11-year-old Jaishree has a rare disease that restricts her movements and making her unable to even swallow her own saliva. She underwent treatment when she was 5-years-old but it has unexpectedly recurred again leaving the whole family in despair.

Shalini and Kumaresan were on cloud nine when Jaishree was born. She was the apple of their eyes and grew up healthy until she was 5-year-old. Suddenly, one day she couldn't walk, talk or sit unassisted and became very weak. She was rushed to the hospital and doctor told them that she had a rare disorder called Pantothenate Kinase deficiency dystonia. They didn't know what this illness was and when the doctor explained it - they were completely broken.

Dystonia is an umbrella term covering a number of conditions. It is a neurological condition leading to abnormal movements or postures and affects the brain. If not treated at the right stage, it is fatal. Jaishree had a deep brain stimulation implant in 2012, but within 3 months she developed infections and the implant was removed.  After a few years of relative calm, she began to slip back into fatigue, weakness, and pain.

Shalini took years to overcome the shock and the trauma. She still couldn’t believe that her child is endured so much pain and indignity. She has not completely understood the disease, but she can see the intensity of Jaishree's suffering. She struggles a lot even to take a step and often faints with the pain of the effort.

“ I can’t explain what I’m going through. I can’t close my eyes, I only see her suffering in pain. I never thought that she would go through this pain again. I’m gathering all my strength with a hope that she will recover completely. I don’t know what I can do to save her or even comfort her,” says Shalini

Father is not sure if he'll have his house when they go back, he cannot afford any more

Jaishree’s parents are from Namakkal district. They came all the way to Bangalore for treatment leaving their son Ashwin (7) at a relative’s house. Shalini does not leave Jaishree alone even for a moment, she is very restless. Kumaresan sleeps in the corridors of the hospital.

Kumaresan made money ironing clothes. Now that he is not in town, he has no source of income. Despite the poverty, he was determined to give his children the best education possible. He got admission for Jaishree in a private school. He can’t bear to see that his daughter’s education is discontinued and she is now battling for her life.

“I have taken a loan on my small 300sft house. We managed to come to Bangalore and meet expenses till now, but it is not sufficient. I don’t even know if I’ll have a house when we go back but my priority is to save my daughter, no matter what I lose,” explains Kumaresan

Kumaresan earns only Rs 2,000 per month and his wife ran a small beauty parlor and earned a bit more every month. But now both of them have no income and their savings are exhausted and they have nothing left to sell. Only a surgery can help Jaishree to live a normal life. The surgery cost Rs 17 lakhs. Only your contributions can save her life. 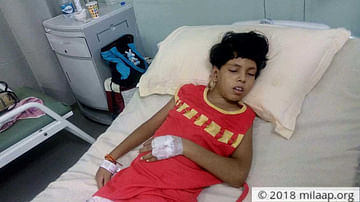 She needs an urgent surgery to recover but her parents cannot afford the treatment.