"I built the toilet for my developmentally disabled son"- Chellammal Aarmugam

I visited the home of Chellammal Aarmugam in a village called Velakanatham, some 50 kms from Tiruchirappalli, early on a cool Monday morning. She was home with her twenty-two year old son. She and her husband, both work as casual labourers in construction and agriculture sectors. She was home today so she could look after her son. "He has some form of developmental disability", she said. When he was five years old he suffered from a severe fever that has led him to this condition. Her husband is the only regular working member in the house, but, being a daily-wage laborer, work is irregular. She told me that she took the loan to build a toilet for the sake of her son. They otherwise used to walk to an open field, a kilometer away. Her husband and her are used to the drill but as her son grows older, physically, she finds it difficult to control him. "I have to always accompany him. He doesn't know what to do. He runs here and there and it is difficult to catch hold of him. I had to build a toilet at home for his and our convenience." It was touching to see the love between mother and son. Life is, to some small degree, much better for them now. As I left their home, the son, very lovingly, screamed out, "Tata". 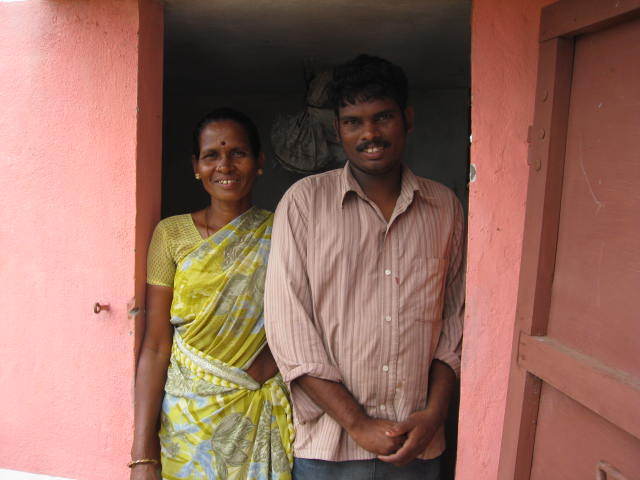 Chellammal and her son