Shares
Shares
Share on whatsapp
I met Vanlalsiami at her home in Luangmual village, an hour’s drive from Aizawl, Mizoram, in north-eastern India. Her house was in one corner of the village and was connected with the center of the village by a small road, crisscrossing two or three hillocks. We met her in the afternoon when she came back after her days' work at her butcher shop. She has been working as a butcher in the local old market, in the city center, for more than twenty years now and has a permanent place to sit. She says it took her years to pay for her permanent place in the butcher market and she has worked very hard for that. She was one of the first few borrowers of WSDS when they started their operations in areas around Aizawl city. She remembers how unrealistic it had seemed to her at first when the office staff of WSDS had held a meeting in her area to convince women that, unlike the banks, they will give them loans without taking any collateral. Eventually, she along with many of her friends in the neighborhood took a loan of Rs.20,000 each to invest in their businesses.
Vanlalsiami took the loan to buy piglets, but instead landed up investing it in her butcher shop. She says that in her corner of the butcher market they buy beef on credit from a dealer and are able to pay him only when they sell off all their stock. On most of the days the women in the market share the slaughtered cow which they sell at their individual stalls, but on Saturday's each of them is able to sell one cow each. They earn well on Saturday, but it also takes a lot of money every week to buy that much meat from the dealer. The loan helped her get rid of this constant cycle of debt. Now she never takes any meat from the dealer on credit, and she is proud of that. Over the months, her profits have increased, and she is able to save more too. Vanlalsiami encouraged more women in her neighborhood to take loans from WSDS and invest properly in their businesses. She also takes it upon herself to check with the new groups if none of the members are defaulting and encourages them to make their repayments on time. She is also a member of MHIP, a women's group active across Mizoram to help them in various issues. 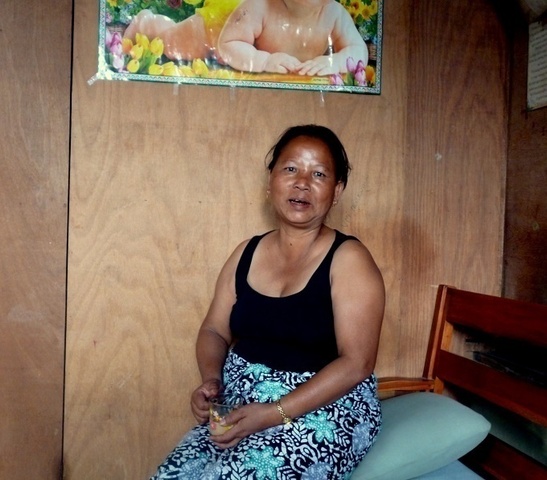 Vanlalsiami has three daughters, one of whom is married and also has a kid. The other two are learning tailoring and studying in college. Her earnings from the butcher shop are the main source of income for the family. Vanlalsiami's loan cycle just ended this month and she is eager to take a second loan. She says that she'll buy at least two more places in the butcher markets around the city and employ people to sell meat. Lend a hand to women like her to dream big and achieve their goals in life.